Tramp in the general vicinity of Five Passes

Sarah and I were out for a quiet dinner with my parents last Sunday night. We were talking about the tramps we wanted to do over the few weeks we had down in Te Anau, overnight trips into Lake Adelaide or around the Hump Ridge were mentioned. But there is one trip that has been on my bucket list for more than a decade - Five Passes. Dad pointed out that the extended forecast was the best he'd seen all summer and Sarah was keen to get straight into a longer tramping trip. The dinner turned swiftly into a planning session with me hastily scrawling notes on good campsites and trying to come up with a superb round trip.

We managed to borrow all the tramping equipment we didn't have and get some back-country cuisine from mum's outdoor shop: Bev's Tramping Gear Hire. All set for a five or six day adventure our packs weighed 18 and 22kg. My youngest brother Douglas dropped us off at Deadmans Track (near Gunn's Camp on the Hollyford road) just after midday on Monday. With heavy packs it made for a grueling start to a trip. The DOC website has this to say about Deadmans:


it is a challenging tramping route

It took us five hours of slowly labouring our way up to the Routeburn Track near Harris Saddle. Deadmans was surprisingly well marked and unsurprisingly steep.

We quickly got off the Routeburn Track and skirted our way around Lake Harris into the Valley of the Trolls. After meeting another couple of trampers about to attempt Mount Xenicus we made our way up a steep and imposing waterfall to our first campsite beside Lake Wilson.

The following morning we made our way around the gorgeous lake and North into the Serpentine range proper. The tops travel was wonderful, open and easy going. We could mostly pick our path to avoid the patches of snow although we did get the ice axe out for a short accent.


This idyllic tops travel involved some amount of backtracking when we got bluffed out but by the end of the day we reached the first of two lakelets where we set up our second camp. We planned to make it to North Col and onto Lake Nerine on day three, steep rocky bluffs almost prevented that however we arrived around 3pm.

Unfortunately it was a very overcast day and rain was forecast for that evening, usually that wouldn't be a problem but the following day's route to Park Pass was described by Geoff Spearpoint in Moir's Guide as:

Geoff is not known for adding any superfluous words and I have first hand experience that snow grass can be evil when wet. With these factors in mind we decided to push on and walk an extra few hours North to Park Pass before the rain set in. The sidling was steep so when it started to rain that evening we were glad to have gotten past. Just to add insult to injury Park Pass was too windy to consider setting up the tent so we had to continue down to the bivy in the valley.

We were so tired that we quickly assembled the tent and cooked dinner in the tiny bivy. Our tent reached the rock roof so it was a bit claustrophobic. After dinner I thought I smelt smoke so walked around the large rock that we had called home - turns out the real bivy was on the other side! A party of two trampers were enjoying the large spacious shelter with a small fire. Although there was plenty of room we couldn't muster the energy to move around from our cave. 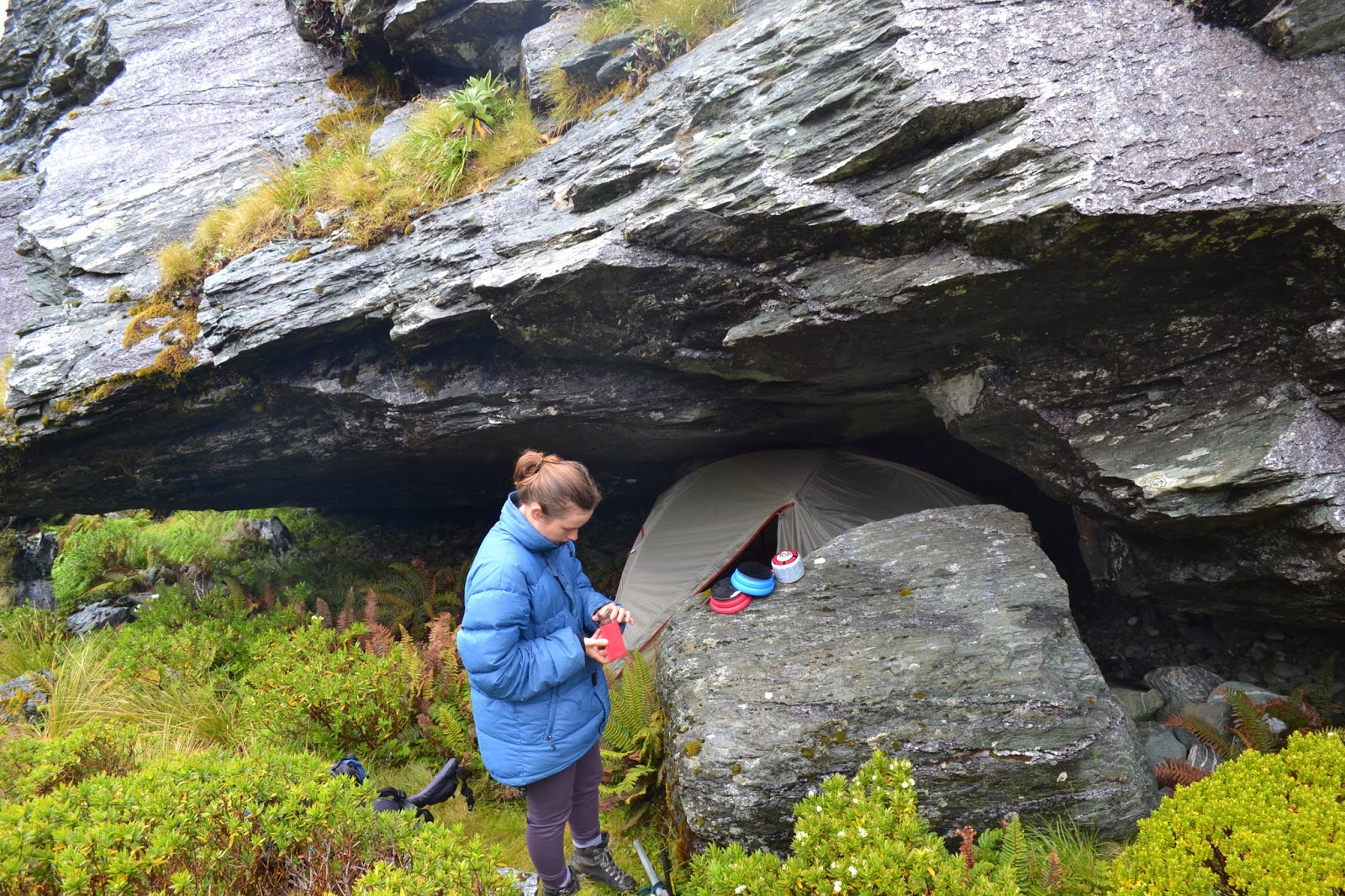 The next day was a pleasant stroll down the valley to Theatre Flat for lunch, before a grunt up to our last camp at Sugarloaf pass. 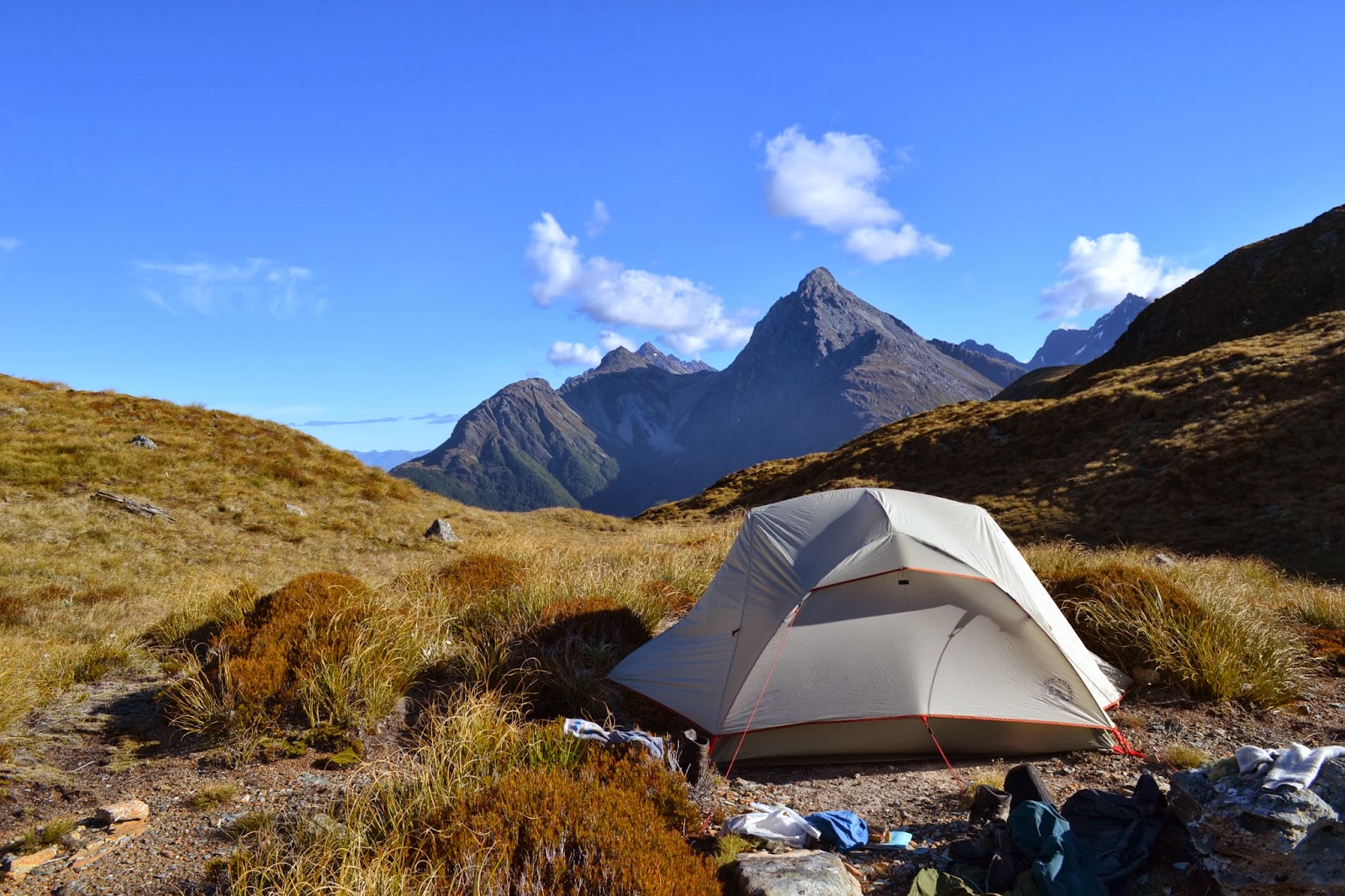 Our final day wasn't as easy as I'd assumed it would be, we just had to walk back to the divide via the nice smooth Routeburn Track. After slowly making our way through tussock and alpine scrubs the highway of the Routeburn was quick underfoot, but boy oh boy did it go on and on! We kept up a good pace until Haris Saddle then started to slow down as our feet started hurting. We made it out by dark but hitchhiking proved impossible so we had to set off the SPOT to get Douglas to come pick us up after work. As after any long tramp the shower was much appreciated - even though it was at midnight!