After Machu Picchu one of the most highly recommended places to visit in Peru is the Colca Canyon. An extremely deep canyon that features beautiful oasis and majestic soaring condors. From Araquipa many tour operators offer guided tours of the canyon - usually taking two or three days. The tours all pick up customers from their hostels at 3am and return late in the evening after action packed days.

Sarah and I decided that we could travel independently for this trip, we wanted to use the tent we’d been lugging around South America but hadn't gotten to use.

The freedom of traveling without a guide started off rather poorly. Our plan was to leave on Sunday morning and get to the small town of Cabanaconde that evening. Because many professionals visit the city for the weekend all the buses were fully booked. We managed to book an evening bus ticket to Chivay, a small town half way to Cabanaconde. The extra time in Arequipa wasn't entirely wasted, we got to visit the incredible Monastery of Santa Catalina. We found a crummy but cheap hostel as we arrived late in the night.
Unfortunately our transportation woes weren't alleviated in Chivay. The only bus that went to Cabanaconde didn't use tickets - rather you just had to queue in the sun waiting for the bus which might or might not have room. After we’d ruled out hiring a taxi for $200, it was our only option so we settled in at the bus station to wait.

Two hours after the bus was due to arrive it still hadn't turned up. A entrepreneurial minibus driver noticed the large frustrated group and offered a ride direct to Cabanaconde for twice the price of the bus ($5 or so) - we couldn't say yes fast enough and 20 people were crammed into the shiny 16 seat van. We finally arrived at the canyon side town mid afternoon - a day after we had wanted to.

We followed a recommendation and immediately visited a hostel known to be very friendly to independent travelers. This proved more than accurate as the host offered to take our excess bags while we hiked and pointed out the way to descend into the canyon to the Oasis. 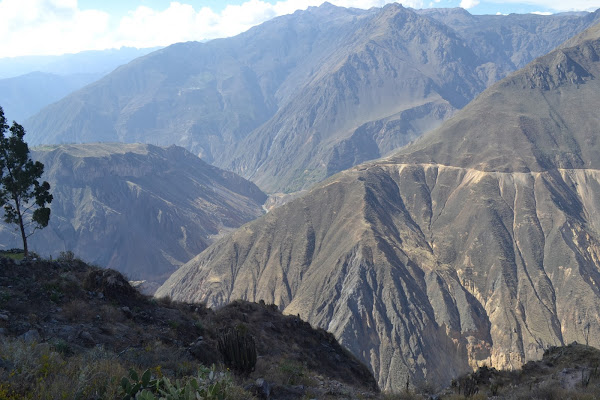 A very hurried repack ensued, and then we were finally on our way. The trek down was reasonably steep, and being late in the afternoon it was very hot. It only took an hour and a half before we arrived at the oasis lodge at exactly the same time as a tour group which included our friends Inge and Coraline from Huanu Potosi!

After paying our $2.50 camping fee we set up the tent by some hammocks and got into our swimmers. The pool was deep and warm, surrounded by big rocks to jump off. We enjoyed the refreshing half hour before the sun went down immensely. It was a short but still an amazing swim - rinsing off all the dust and sweat after walking in the hot hot sun. 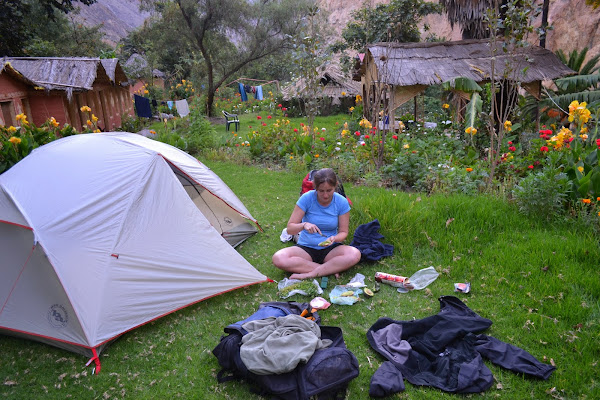 Warm beers and the last of our picnic food followed down by our tent. It was sad to eat the last of our Avocado, cheese and herb sandwiches. We introduced four other people to the joys of avocado and pringles. At happy hour we got a few Pisco Sours - unfortunately they didn’t live up to expectations.
Listening to another group’s briefing informed us that we should get up early - walking at 5am early. So we dutifully set the alarm for 4:30 and finally got to enjoy sleeping in our own tent. We’d lugged it around South America for six weeks without setting it up.

It was already light at 5am when we got under way climbing up the hill. Unlike all the guided groups we had large, heavy backpacks and it was hot work. It took us two and a half hours of steady climbing to get out of the canyon and into the stifling sun. 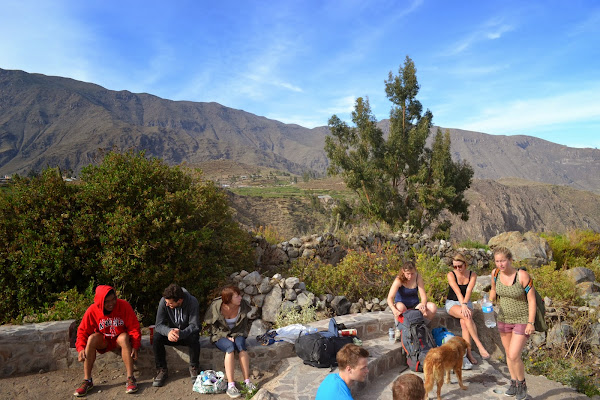 Taking a shared bus trip with guided group back was maybe going to be possible. We hurried back to the hostel for breakfast and to repack.

We arrived at the town square at 9am to see if there were any tour buses leaving with spare seats. Fortunately there was also a public bus, bound for Arequipa, just about to leave. We decided that the bus was the safer option, so once again abandoned the idea of joining a tour, and hopped on the bus.
The bus followed a beautiful scenic rout that skirted along the canyon until we approached Chivay. As we drove, we saw condors soaring about the canyons. We were feeling quite smug with ourselves for figuring out how to get back to Arequipa so quickly and cheaply. It looked like we would be arriving at our destination just after lunch. However our good fortune ran out when the bus broke down climbing the mountain side just outside of Chivay. The bus driver tried to start the bus in neutral/reverse which gave all a fright. Eventually we all got off the bus while the driver made numerous attempts to start the engine. After about an hour of tinkering with various pipes under the front of the bus, it miraculously started again and our return trip was back underway. 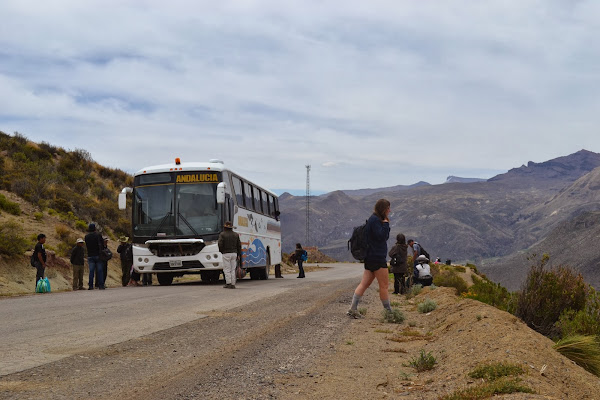 We arrived back in Arequipa at around 4pm, had a quick bite to eat at the bus terminal, and hopped straight on to our next bus, bound for the southern Peruvian town of Tacna - just six hours of further busing to go!
Posted by Brian Thorne at Tuesday, December 17, 2013