One of the biggest adventures on our South American holiday was climbing the 6080 meter high peak Huayna Potosi. This impressive peak overlooks La Paz, the capital city of Bolivia. Many of the tourism companies offer guided trips up the mountain. We were walking around on our last day in La Paz, we hadn't quite made up our mind whether to take a one way bus trip to Lake Titicaca or to try climb this formidable looking peak. After calling in on many of the operators we selected an operator who was busy prepping a young group of English speaking tourists. We convinced him to add an extra guide and to take the two of us in one hour! The charge was only 950 Bolivians per person (around $170 NZD) for three days including food, transport and accommodation. 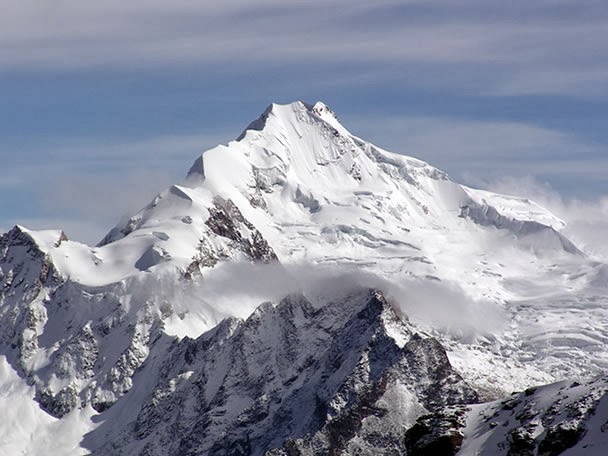 So we hurried back to our hostel to pack up all of our belongings and pack for an alpine adventure! We met up with our guide who thankfully spoke more than passing English. He organized a taxi to take us to the base camp where we met the rest of the group. They were a veritable mix of Dutch, Israeli and anzacs. They didn't believe that we had only jumped on the tour that morning as they had all booked weeks in advance!

Introductions occurred over a nice lunch. Then we were busy getting ready for our first altitude and gear acclimatization walk. The destination was a glacier only an hour away, but at 4800m high this really took its toll! Once there we had a basic priming in ice axe and crampon work, walking up and down steeper and steeper ice on the glacier. I was a little surprised that no self arresting was taught, but of course for the actual climb everyone would be roped to a guide. 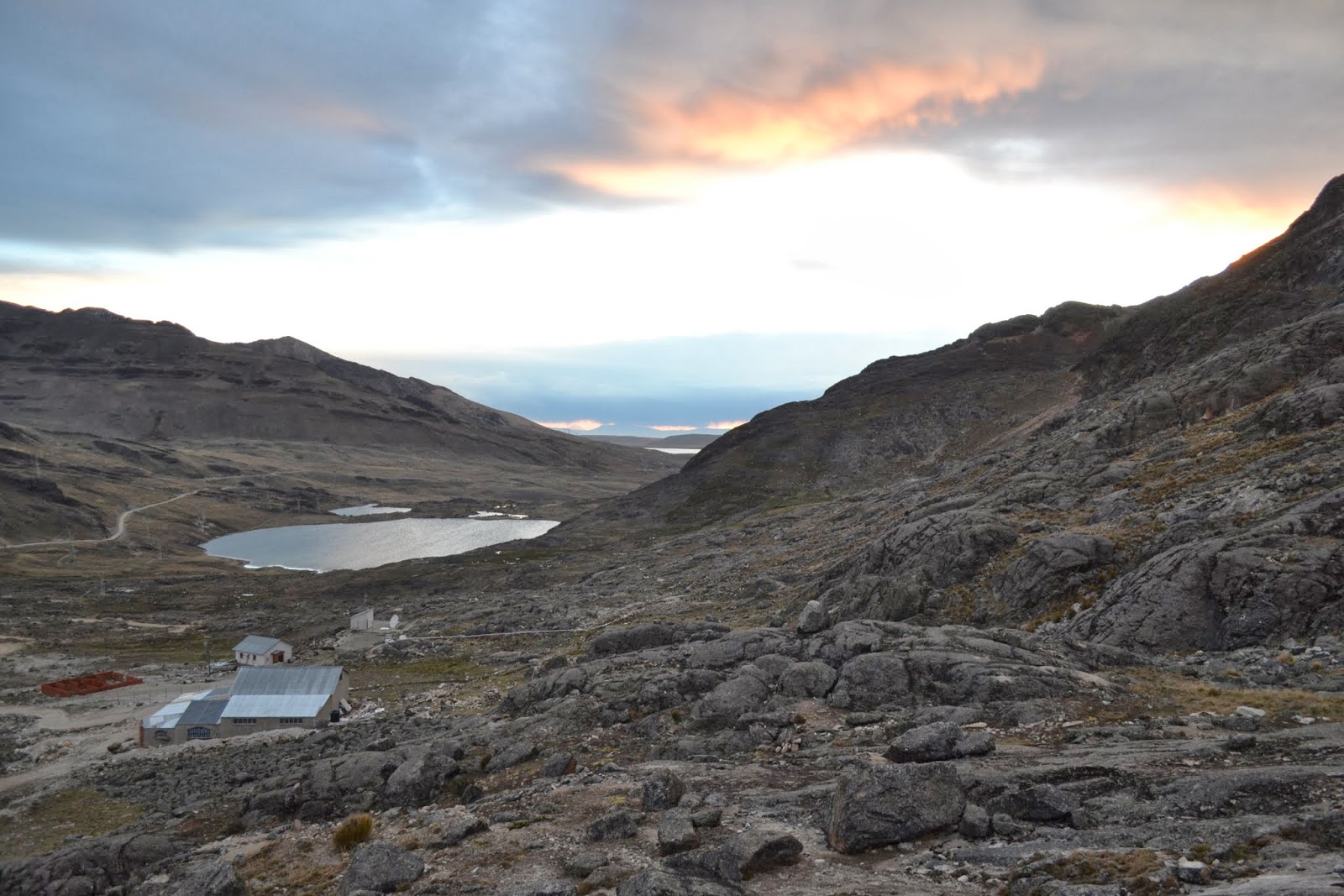 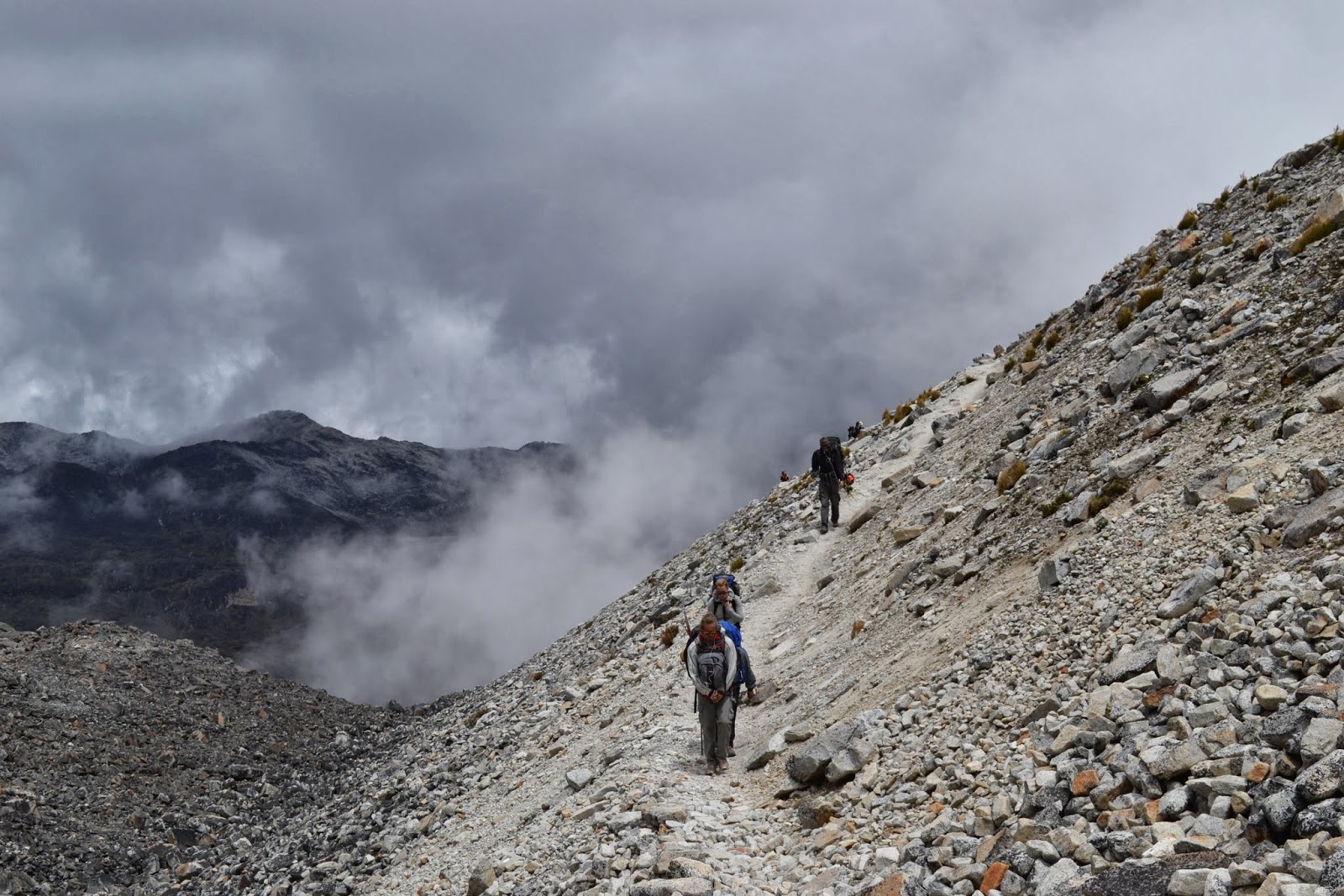 After getting our bearings on the ice, the guides set up top ropes for Ice Climbing! They set the first one up on a relatively easy slope. This took a while as there were nine people to get through, Brian opted to play photographer. 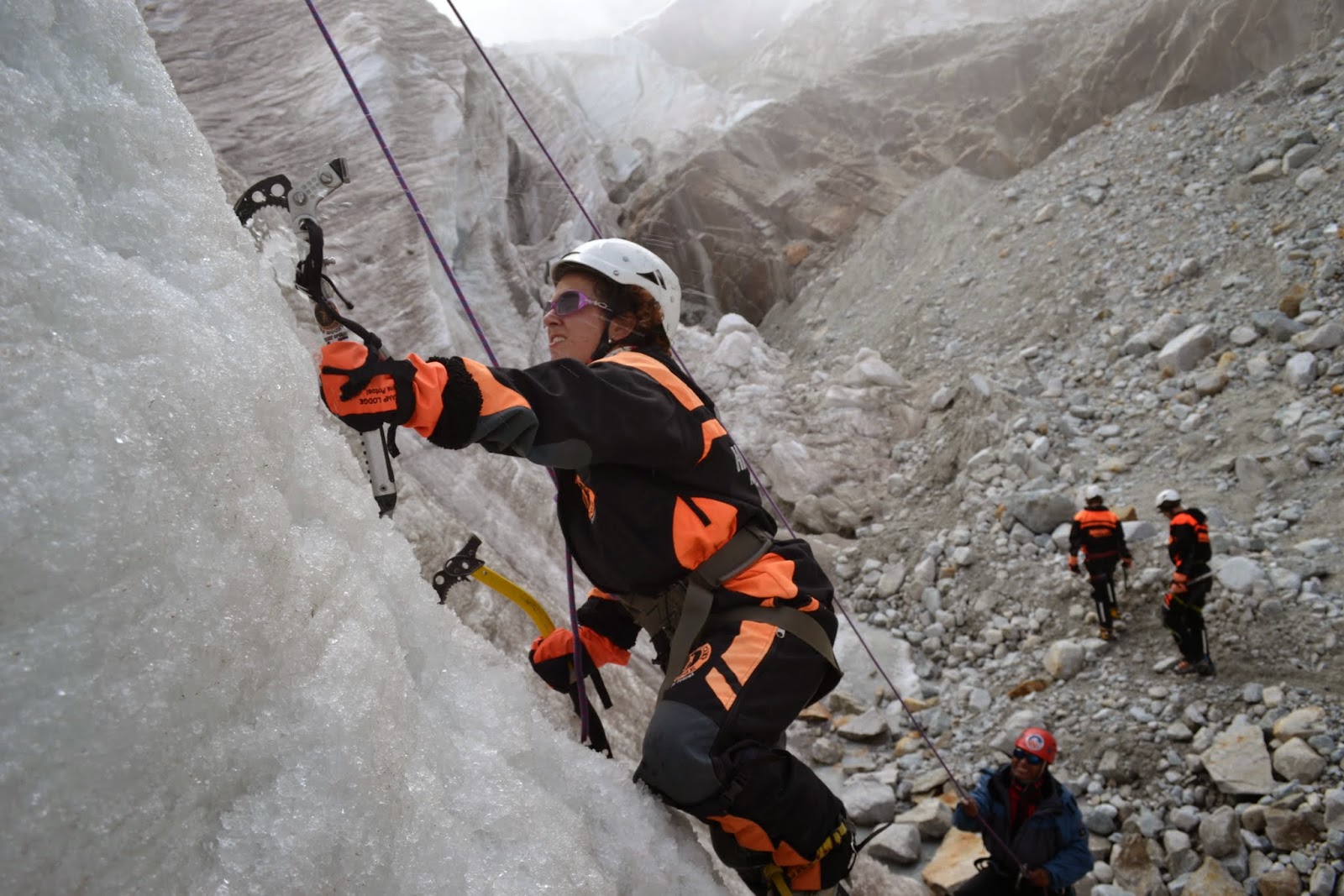 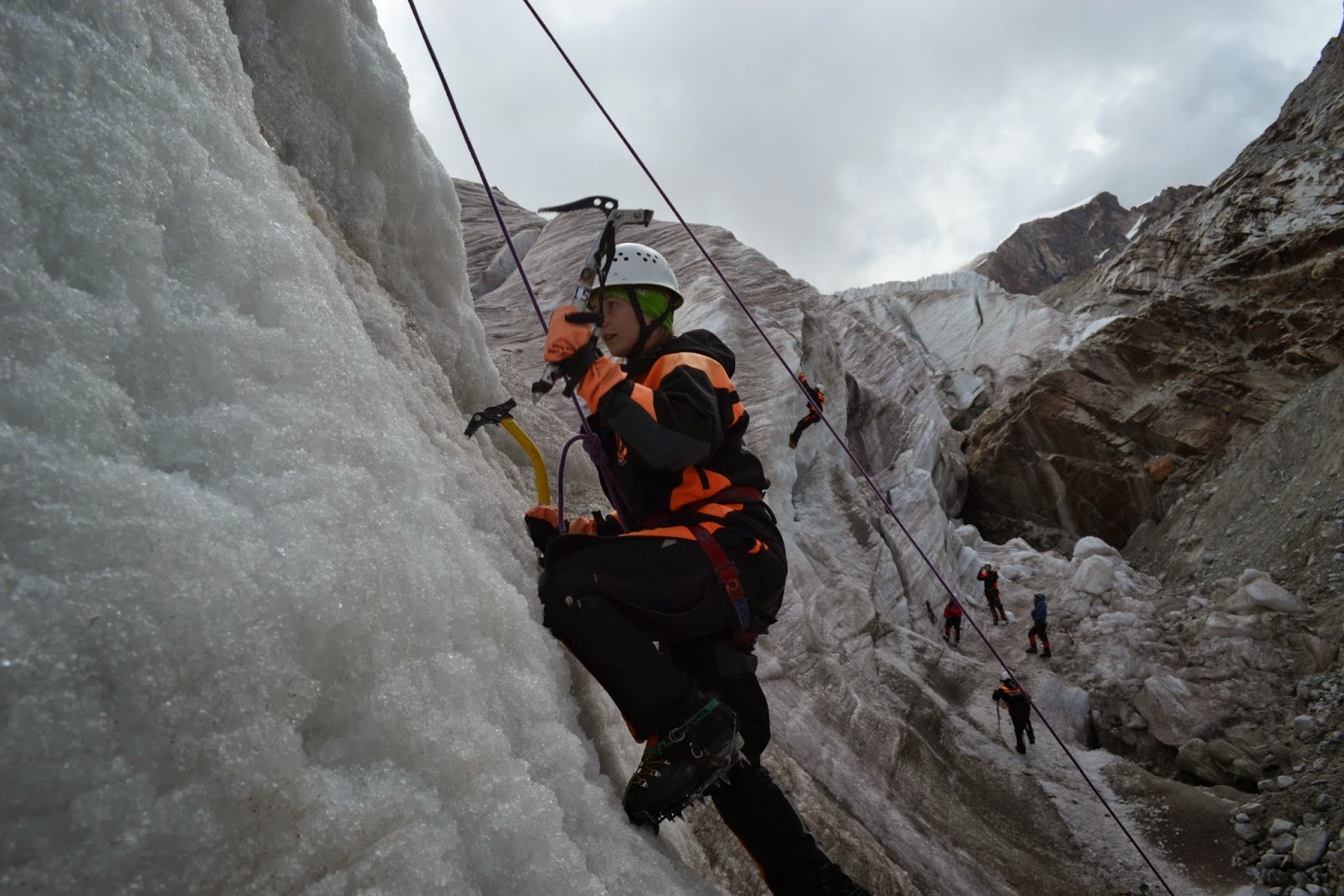 The second anchor was set up above an overhang which was a much trickier challenge for everybody. In fact only about half the group even attempted to climb it, and of those maybe half made it to the top - both of us included. 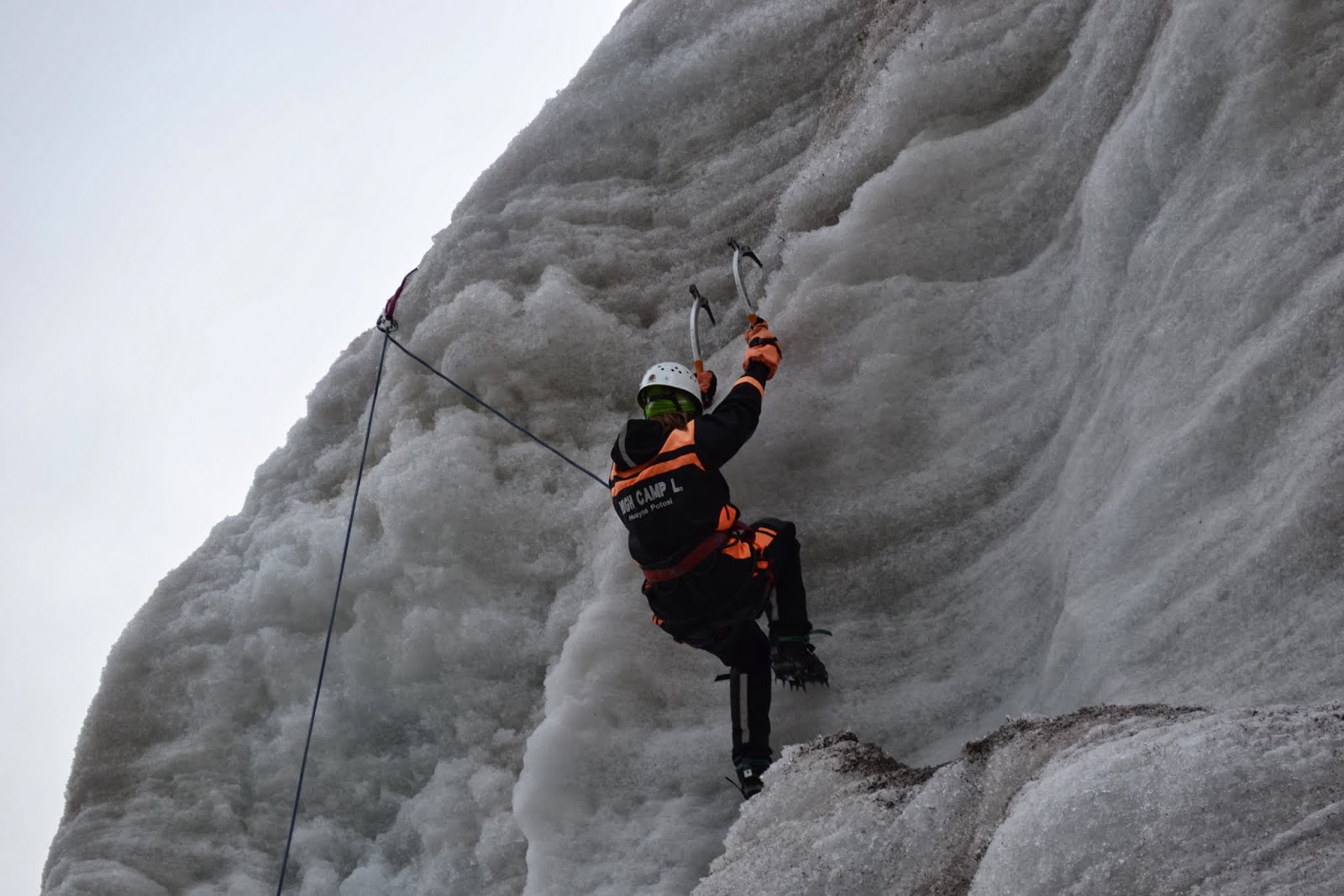 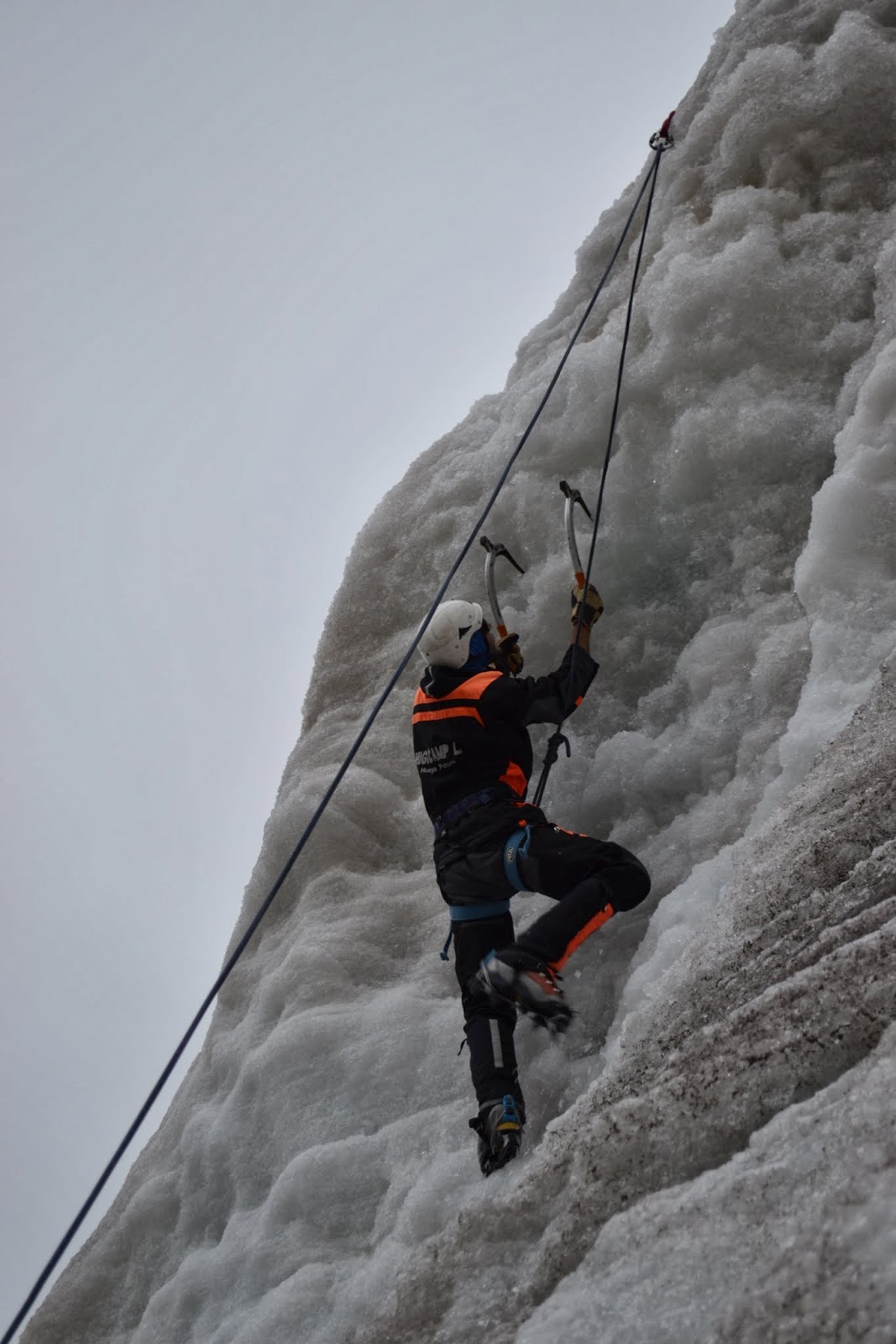 Getting back to the camp before dark was an opportunity for everyone to compare their aches, pains and sicknesses that Bolivia seems to share out generously. The base camp was equipped with two toilets near a stream - you had to fill a bucket after doing your business to flush them. Luxury compared to what was to come! Egg fried apple was an interesting dinner to say the least.

After a big sleep in the next day we had a gentle but still difficult walk to High Camp. It was a two to three hour walk but everyone was feeling the altitude, some would take just a few steps before becoming to breathlessness, others would just feel dizzy. Any outbursts of speed or effort would soon be followed by a severe lack of breath. 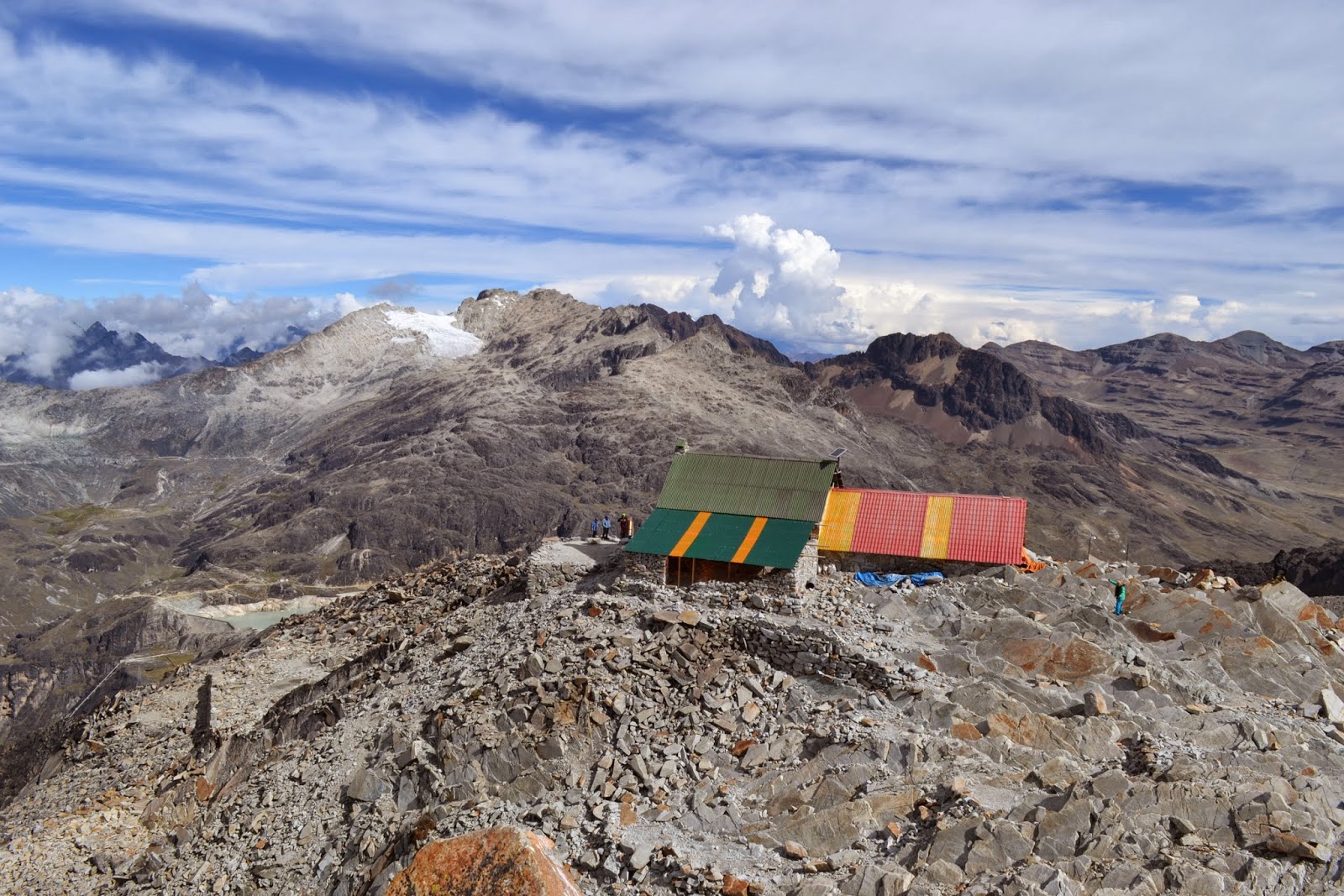 Once we arrived at the high camp (5200m) almost everyone went straight to bed, the guides started cooking and Brian continued walking up to catch sight of our peak and to take photos of our camp. By 6pm we were all encouraged to be in our sleeping bags attempting to rest before the summit attempt.

Sarah woke with a groan. It had just passed 11:30pm and most of the group hadn't caught a wink of sleep. Looking out the window we saw lightning exposing the entire mountain side, slightly worrying to say the least! Our guides told us that the storms were common because of our proximity to the amazon jungle. We dressed quickly and attempted to eat stale bread and coca tea for breakfast. We had together been assigned the best English speaking guide "Friendz", and our group of three was one of the first to head out of the camp sometime around 12:30am.

We scrambled down to the glacier before donning our crampons, ice axes, and roping up. The glacier ice was solid and made for particularly good travel, although there were of course pockets of really hard ice which caused us to slow down substantially. Friendz set a good pace, a compromise between going too fast - succumbing to the dizziness and exhaustion and too slow which would mean we wouldn't make it. The company had set a cut off time, most parties could make the summit in 5 - 6 hours, and if they thought you were outside of that, they would turn you around.

Slogging onward the weather closed in and turned claggy. To start with we could see the lights from all the groups attempting the mountain - our groups were not the only people attempting to summit that day. By 2am we had been passed by most other groups, Sarah was really starting to suffer from the effects of altitude, dizziness was almost getting the best of her. We took turns leading then being lead by the group containing Nick and Inge.

By 3am a couple of groups from other operators had turned back and passed us on the way down. Addie traveling with just her guide was behind us and we could still see the Nick and Inge group in front of us so we kept on going.

Friendz told us at about 4am that he didn't think we would make it at our current pace, he also predicted the group in front wouldn't summit either. When we stopped for refreshments, the lone trooper Addie caught us up. The guides conferred and transferred Brian onto Addie's rope leaving Sarah to continue up to see the sunrise with Friendz.

It didn't take Brian and Addie long to catch up to Nick and Inge which prompted the guides to have another reshuffle. Inge wasn't doing so great so Nick joined Brian and Addie in pushing onward to the summit.

Sarah caught up to Inge and they combined, freeing a guide "Wilson". Wilson rushed up to Brian, Nick and Addie. Sarah and Inga climbed to 5850 meters before they turned around. They were massively high, well above the clouds. 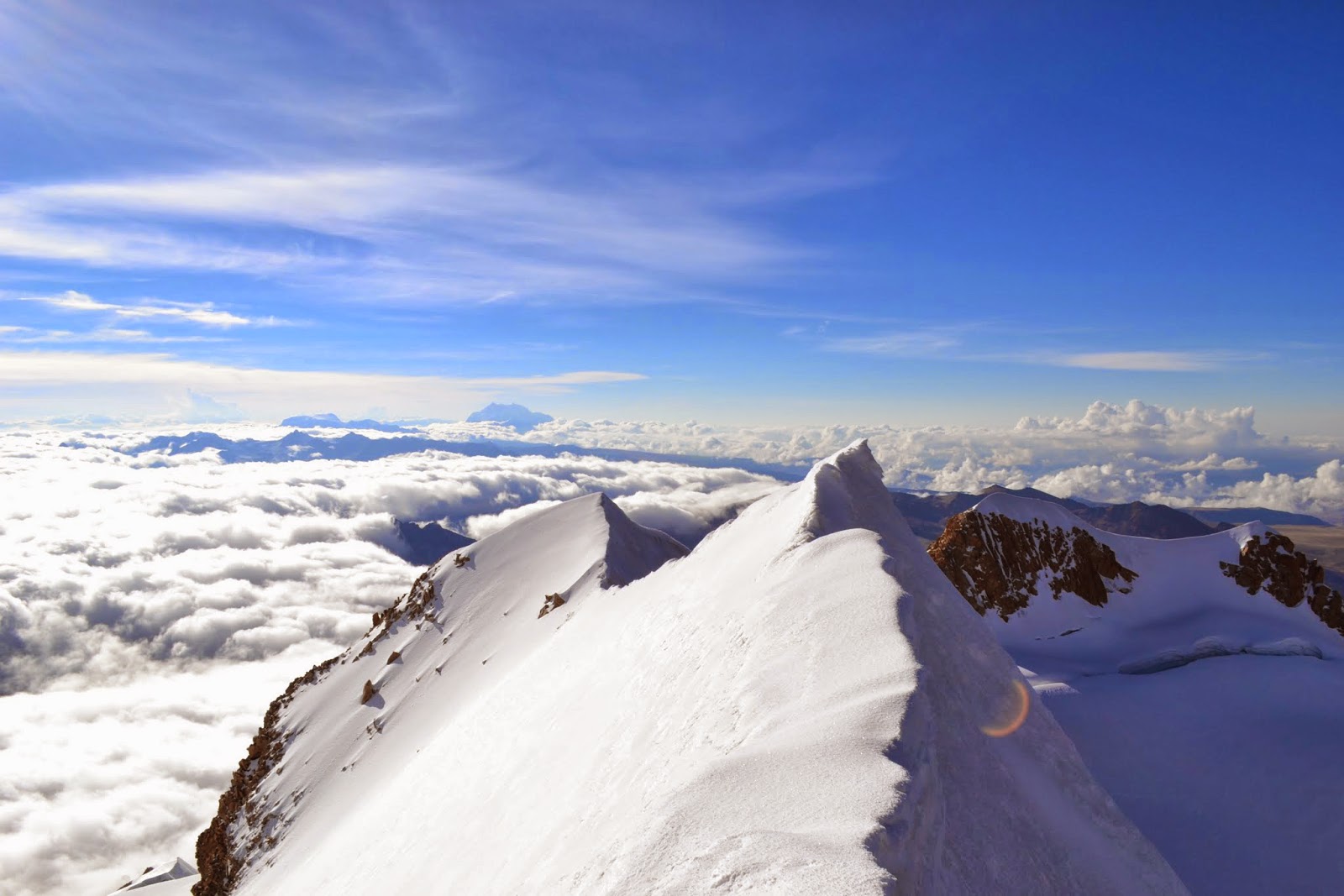 Wilson took Nick and Brian, leaving Addie once again to continue on with just a guide. Nick was really struggling with the effects of altitude, needing many rests and lots of encouragement as the weariness was getting to him. Brian and Nick got up to 6000m before Wilson decided that Nick couldn't go on. One of our other groups was descending from the summit so Wilson instructed Nick to join them heading down.


Brian was then left alone with the guide Wilson. Both being familiar with mountaineering they raced up the final and most technical part to the summit. It was now at least an hour after sunrise, but what a view! 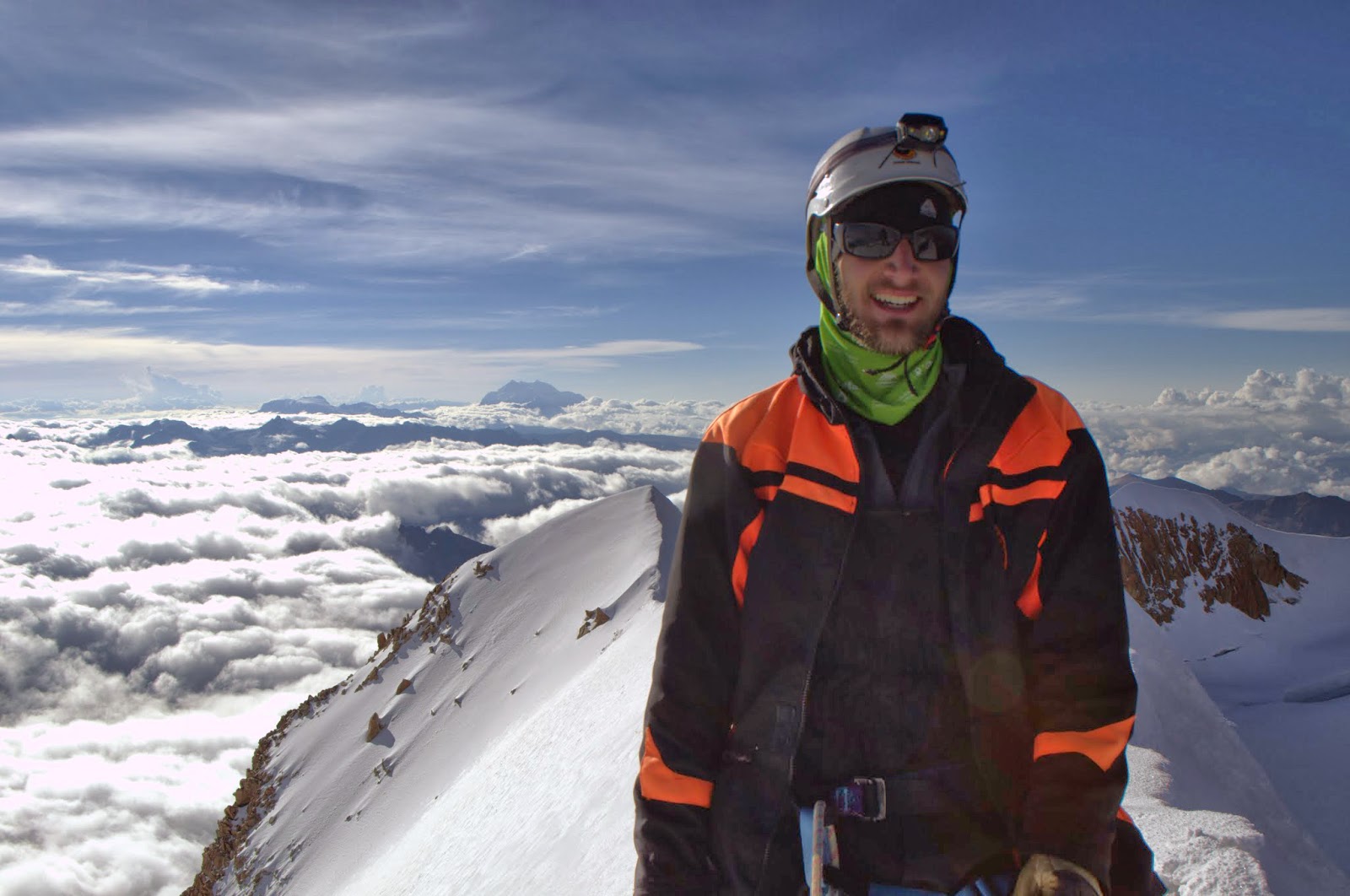 After spending a few minutes taking panorama photos and admiring the view all the way back to Cusco, they began descending at a rapid pace, soon overtaking all the other groups descending. Wilson wouldn't let the leash or crampons be removed for descending some of the steep snow which was frustrating. Sarah, Inge and Friendz went down the final section on rock instead of down the glacier. Sarah also had found it frustrating that the guide wouldn't consider removing the rope - even on an easy rock scramble down to the hut. It wasn't until after Brian had returned to high camp and going for a scramble up the rocks that we met back up.

Over the next hour all the other groups returned in various states of exhaustion, exhilaration and disappointment. It was a quick bite to eat before heading back down to low camp and the trip home. Because we had arranged our trip after all the other plans were made we once again got the taxi option, this would have been fine except our ride managed to get two punctures on the trip back to La Paz - as with most cars there was only one spare tire so we had to wait more than an hour for another car from the same company to be sent out.

Doing the mountain guided was a mixed blessing, enjoyed being fed and not having to arrange transport, accommodation but would have liked to take the leash off while actually climbing! We can now both attest to the fact that altitude does weird things to you. We tried chewing on Coca leaves (yuck) as well as the Gringo altitude pills but still felt very weak when going anywhere near a normal pace!
Posted by Brian Thorne at Saturday, December 07, 2013

My goodness that's a high mountain! well done! It sounded lucky to get up the mountain as far as you two did. Awesome work.