The UCCC has sea kayaks!

Back when I was in the UCCC we wanted to expand our fleet from just whitewater and polo boats to include some sea kayaks and maybe even multi-sport boats. Over the last three years a massive effort has been put in by the club's committee to secure funding and purchase the first three sea kayaks.

So now the club now has two single sea kayaks and a double - and they are awesome! Also they are very large. Much much bigger than I expected, nothing like a Tuna or even an Overflow. I borrowed them last weekend as part of an elaborate stag race to Akaroa. I had to take the trailer as well - there is no way the double would have fit on my Subaru! 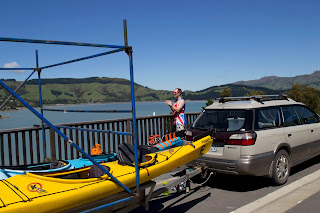 Because they don't fit in the normal boat locker the UCSA looks after them. To hire them you have to get hold of the UCCC gear officer and then the custodian of the old UCSA building to let you in to get the boats. It can take a bit of organizing to pick up and drop them off. I'd recommend two people going to get the boats; otherwise like me you will end up having to ask the UCSA custodian to give you a hand (thanks Chris).

I paddled the double kayak across to quail island where we picked up our soon to be married friend. The boats were great and compared to creek boats have an unending number of compartments for gear. I'd highly recommend getting them out for a paddle from Lyttleton etc.