The next stop on our journey north was a small town called Chañaral. The journey was over desolate land. Chañaral is a very poor, practically abandoned, town, forgotten mines marked the outskirts and many homes had caved in roofs. Our language difficulties came up while  ordering dinner, the waitress was laughing at our attempts to order a "fish of the day" meal. We stayed in a gorgeous hostel. Over breakfast we met some english speaking German travellers who helped teach us a bit more spanish. We left for the bus station with only about 15 minutes spare to get tickets but got approached just outside our hostel by a man asking us where we were headed. It took us a while to understand the question, but eventually we communicated that we wanted to head north and that we were heading to the bus terminal. He kept making gestures and offers that sounded like he wanted to take us. Obviously we were not too keen to jump in a car with a complete stranger so we were trying to back out of the conversation so we wouldn't miss our bus! The friendly Germans came to our rescue and acted as translators informing us that the man was actually a bus driver, tasked with delivering a brand new bus to Autofagasta - on the route we wished to take. He was just looking for anyone to join him for the long drive and was offering to take us there for free. It was a brand new bus, he had to unwrap a couple of seats for us! Although we struggled to communicate he made for a very good tourist guide, taking the scenic route and stopping off for photo shoots. Towards the end he even started teaching us some Spanish! 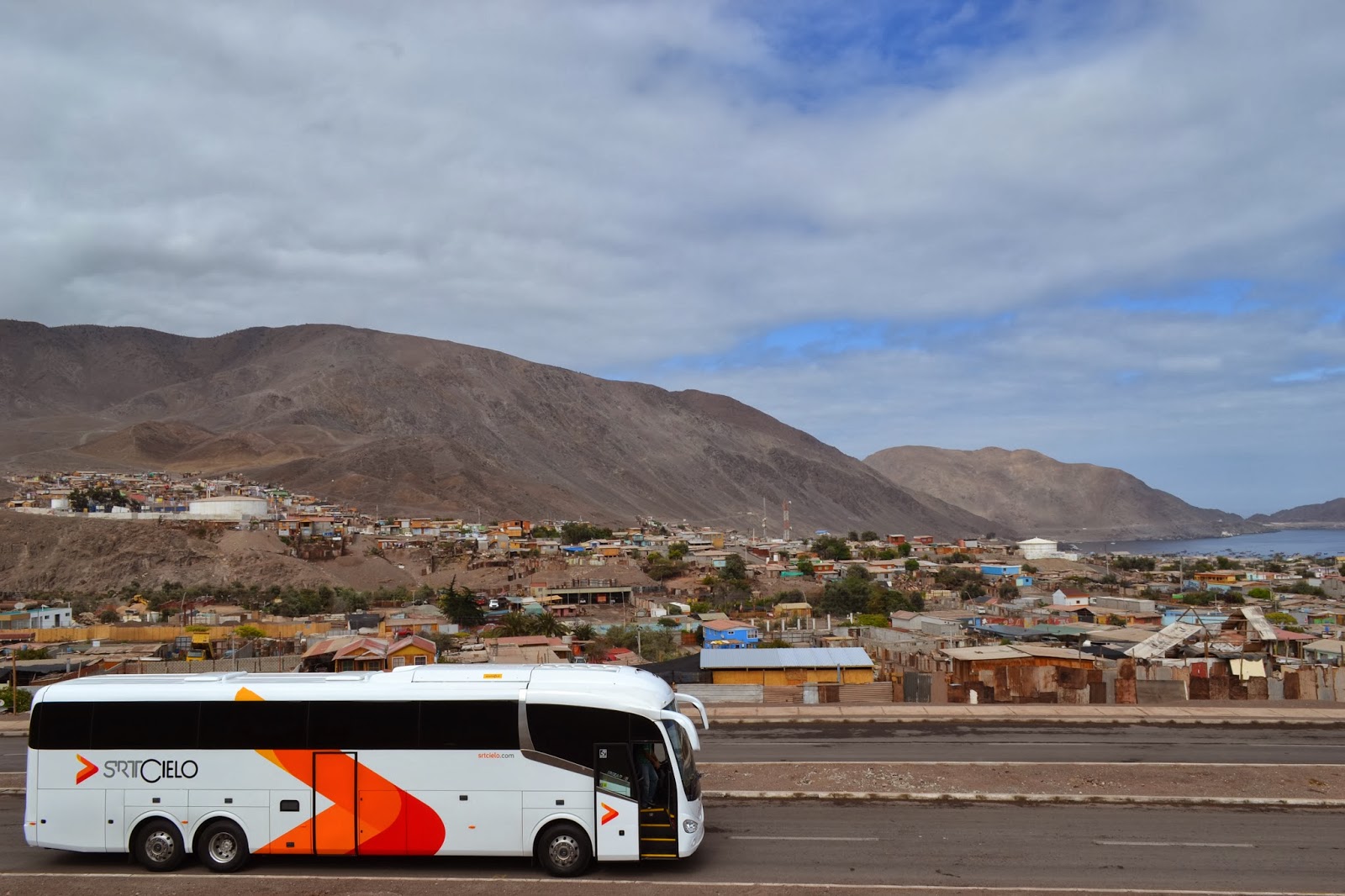 San Pedro de Atacama is a picturesque oasis town in the desert in Northern Chile. We spent a couple of nights there and both really enjoyed it. The town is surrounded by volcanoes and just outside the town were vast expanses of white crusty salt flats. We took a guided tour out to the Salt Flat's Lagoons where we had the experience of swimming in extremely salty water which added buoyancy. Floating in the salty lagoons was really amazing, no effort required. To rinse off we were taken to a small  fresh water lagoon involving a good jump into the chilly waters. We are not sure how the fresh water pools were formed as we couldn't understand our spanish tour guide. Lesson learnt, we didn't do enough research into our tour guide as there were other English speaking tour groups at the lagoons. 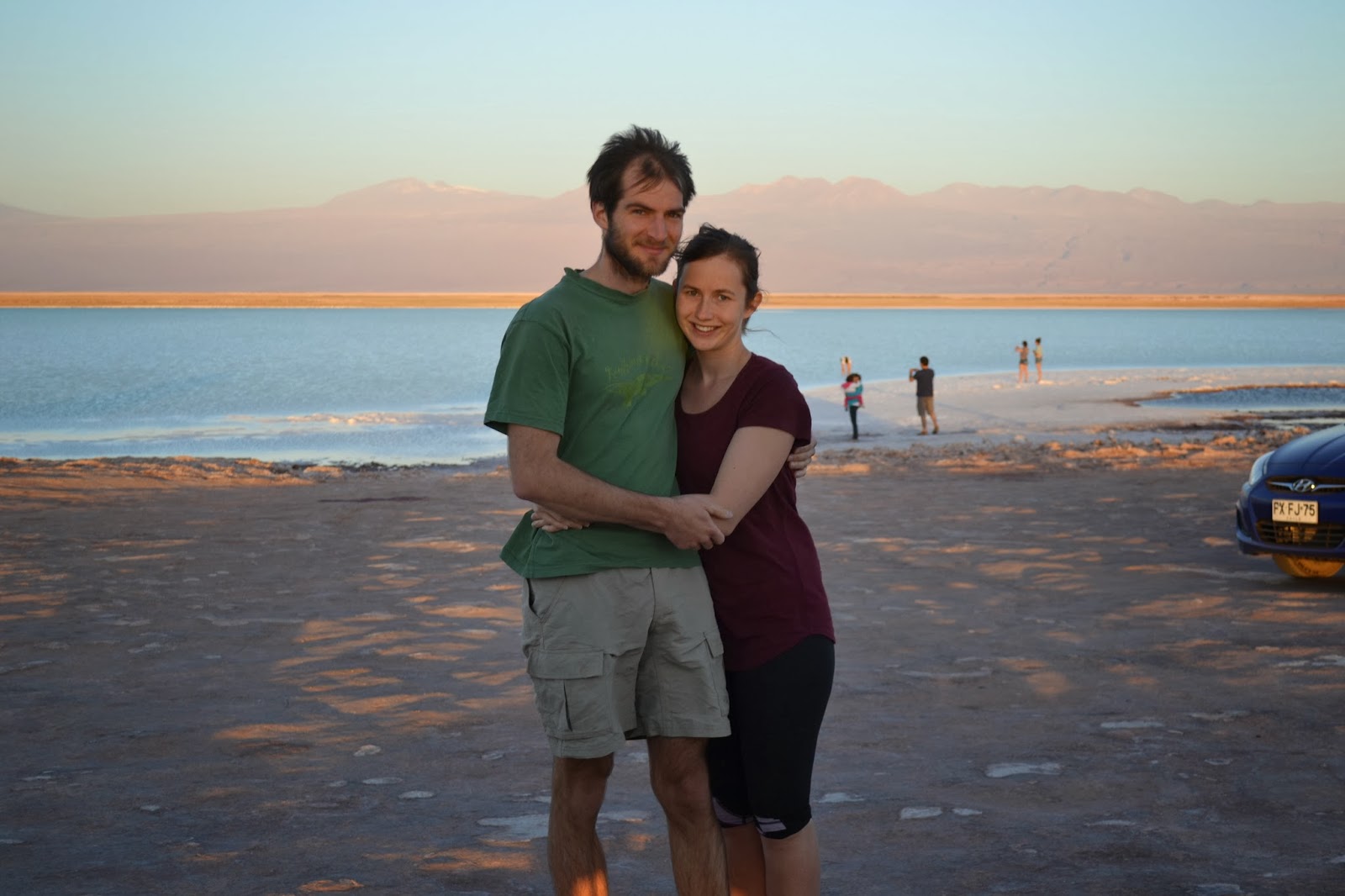 Leaving San Pedro was an interesting experience, we didn't have bus tickets booked so we were stressing a little bit as only one bus left for Argentina the day we wished to leave. We got up early and went to the ticket office but it didn't open until the bus was scheduled to arrive - on the other side of town. Just before the bus arrived we were told the price, which was unfortunately just over what we had in cash. Brian ran into town to try withdraw money from the ATM but the three he tried were out! Luckily some friendly Australians travelling came to our rescue, spotting us the equivalent of about $10AUD.

Coincidently we bumped into them in a tiny town in Argentina three days later and were able to pay them back.
Posted by Brian Thorne at Friday, November 22, 2013