One of the most excellent tramps I've done was into the Murchison Mountains across from Lake Te Anau in Fiordland. I had the pleasure of going with two good friends Giselle Clarkson and Matt Halverson. Since we were all studying at the University of Canterbury we had a fairly long drive south to my Mum's house in Te Anau. Our original plan - walk from the most eastern point in NZ back to civilisation was much more ambitious than the final route we took. We had investigated a boat drop but settled on a helicopter flight into the depths of Fiordland.

We were forced to change location because the helicopter company in Tuatapere was going into receivership! Kim Hollows, one of the helicopter pilots in Te Anau agreed to take us into the Murchison Mountains at a reasonable rate. The thing you really have to appreciate about Fiordland is that the weather can be suboptimal for quite some time. We were stuck in Te Anau for three days waiting for a nice window so that we could fly. On the third morning our daily call from the pilot finally contained the positive news that we could fly.

The flight was truly fantastic, try picture flying in the sun beside the majestic mountains draped in clouds that rise up steeply from the lake... 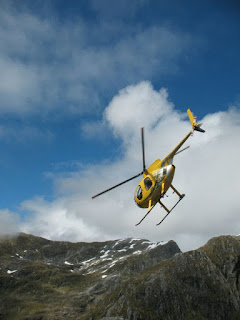 We dropped a huge box of food at Robin Saddle Hut and did a flyby of the gnarliest ridges we would have to traverse before getting dropped off in the middle of nowhere! Watching the helicopter fly away was a terrific (and slightly terrifying) feeling and we were all grinning like idiots. 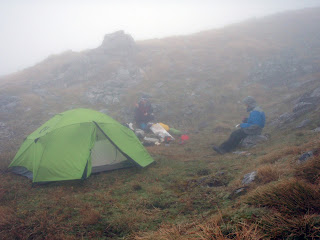 After spotting a Tarr we dumped our packs (which were far too heavy) and went for a walk up a hill in the opposite direction to frolic in the snow. Eventually we got away properly. Later that evening we were scrambling up some steep rocky outcrops surrounded by fog when we got a touch bluffed out. It wasn't a great start, and we temporarily lost a Giselle as Matt and I ascended a steep gully. Since we couldn't see anything we decided to stop and set up our first camp.

Luckily the way was much clearer in the morning and when we pulled ourselves out of bed at sparrow's fart (10am actually) we found our way through the rocky outcrops along the ridge. It seemed to get even steeper for the descent down to Robin Saddle and we gingerly picked our path - occasionally having to back track around. 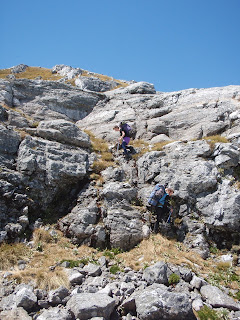 It wasn't too long before we got to Robin Saddle Hut, without a doubt this is now my favourite hut. It was this tiny old hut beside an alpine lake and a very impressive mountain - Mount Irene. 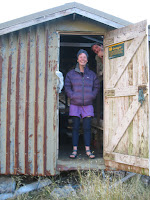 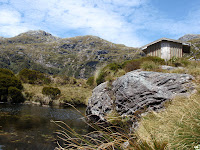 We had planned to stay at Robin Saddle hut for at least a day and I think we all fell in love with it immediately. Not just because of our food drop of fresh oranges, apples, cauliflower etc was here.

The hut book went back to the '70s and my father featured many times, we found quite a few novels and magazines from the '60s and '70s and over the next few days became enlightened on how to "train your housewife" and other very sexist topics.

One fine day we tried to climb Mount Irene but we got to a point where the going was so steep we wished we had ropes. It was rock climbing at about grade 13 and we had been told there is a route up that should be relatively straight forward. After gingerly soloing up 10 or 15m above the already steep slope we decided we were being dumb. We found a ledge to eat lunch on before bravely turning back. 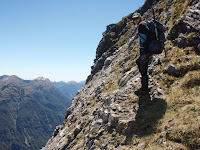 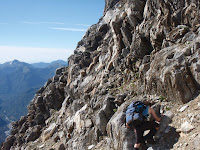 Giselle had a brilliant quote regarding Catholic school girls on our return journey: "There's nothing pure about oral sex and handjobs".

Back at the hut we carefully read all the descriptions in the hut book and found the magic advice from my Dad written 20 years earlier - the trick was to traverse around far lower than we were. 1250m was quoted as the secret sidle height - essentially not to climb before hitting the western ridge which might seem rather obviously looking at the mountain. 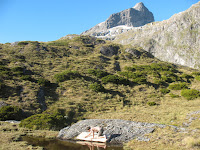 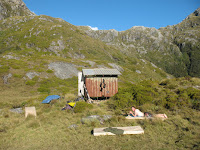 After another day of lying in the sun, scrubbing the mouldy mattresses and going for secretive skinny dips in the freezing lake we went for attempt two. We got up for an early alpine start at 1, no not 1am, 1pm! This time we clearly were on the right path and before long we were well towards the summit. It is worth pointing out the rock was pretty loose and broken. Because next to nobody has travelled there we felt like explorers picking our route up the rock buttress at the top. The going got steeper and steeper, we were loving scrambling up the rocks in the hot sun. 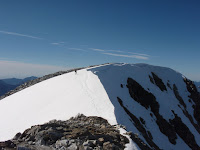 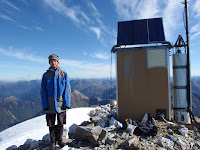 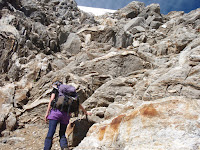 Ice axes came out for the summit cap of snow and we plugged steps across to the radio transmitter up there. It was a small building about the size of a toilet cubical and curiously was unlocked. Obviously we had a nosy inside and I was proud to see all the Tait radio equipment dutifully repeating radio signals from remote Fiordland and Doubtful Sound to Te Anau. We hung out on the summit at around 6pm enjoying the vista. 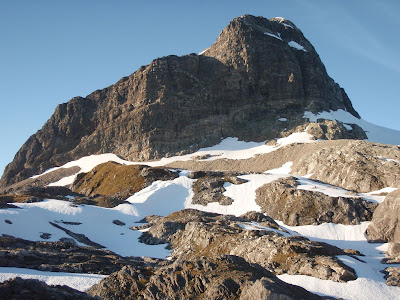 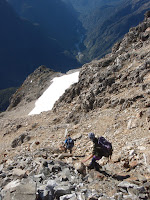 On the descent Giselle seemed to delight in sending speights of rocks down on Matt and I. We were very lucky to escape unharmed! We got back just before it got dark at around 9pm - got to love summer! 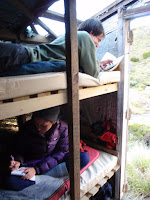 Somehow the weather decided to turn sour so we were forced to spend even more time at Robin Saddle. After reading EVERYTHING in the hut we started to get the itch to leave. With the weather preventing us from straying too far we kept up a brave front on the food eating effort. We still had far too much to carry but we decided to leave as much non-perishables as we could. We decide to "bust a move" if the rain eases before 3pm which it doesn't. Finished Solomons Song and an Asimov book.


The next day was much the same until at 3:30pm we could see Robin Saddle from the hut - still raining cats and dogs but it was good enough for us. On our way to Te Au saddle! 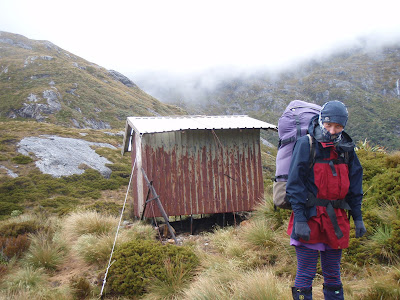 The crux wasn't as bad as it looked or as bad as was described in the guide book. Giselle and I went the hard way up and then found a much much easier route up a gully that we directed Matt to. After a bit of climbing we got onto the snowy tops. I had an epic glissade down and we set up camp at the gorgeous Te Au Saddle. 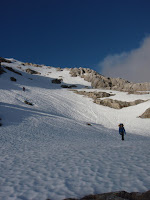 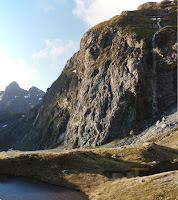 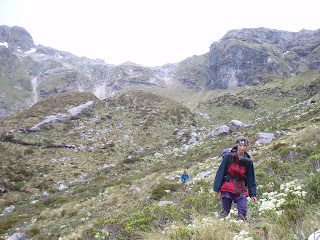 Interesting night; had an amazing sunset shining out over Fiordland then a very strong wind came in. More gorgeous tops the next day but incliment weather.

Unfortunately G wasn't all that so Matt and I helped to carry all her food and axe. Yup 10 days food for two people did weigh plenty thanks!

Camping between Lake Iona and Lake Eva our tent imploded the following night! Giselle and I both woke, sat up, and pushed the roof of the tent back up!

Fiordland bushbashing never fails to dissapoint. Lake Boomerang was particularly memorable. Wading through at one end and getting about a meter a minute through the bush at the other end. Matt lost his camelback's mouthpieceand somehow managed to find it again after ten minutes of crawling back through the undergrowth. I think he must have found a rubber tree and made a new one because that stuff was dense! 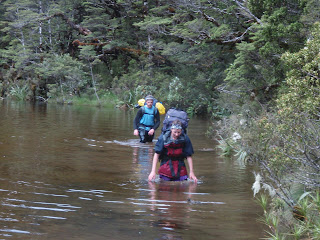 We had a few options from here, we had the food and time to continue bush bashing around to the Luxmore track where we could walk all the way to Te Anau; or we had a SPOT with a "Please send us a boat" message. Since G was not her usual self - actually rather sick we opted for the boat option. We didn't quite bank on the amount of sandflies that would keep us company as we waited on the lakefront - we had the tent up for protection and kept going for walks to escape.

Back in scary Te Anau with all these people ahhh! 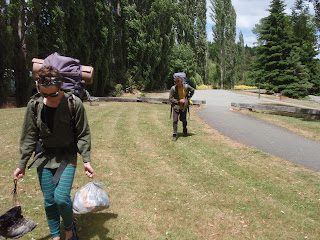 Posted by Brian Thorne at Tuesday, November 01, 2011 No comments: