Well I'm off on an adventure to the states on my first annual leave from Dynamic Controls. I left home in Christchurch at 7am, got an hour in Sydney airport, then had the long haul across the pacific. I can't seem to sleep on these really long flights so I finished my Wheel of Time book, watched 5 episodes of Big Bang Theory, saw the movies Paul, thankyoumoreplease, Arthur, Pirates of the Caribbean: On Stranger Tides, and X-Men first class and eventually landed in Los Angeles. I had about five hours before my next flight so I walked from the airport in search of frozen yogurt and food. I fixed my food craving with a piece of almost every type of fruit for sale at a supermarket called Ralphs. Frozen yogurt goodness would have to wait until I returned to California. 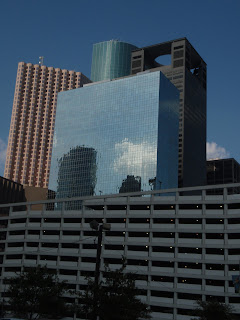 First proper stop was Houston, Texas to pay back a surprise I got a few years ago from Kim. It was gorgeous weather, well over 30 degrees centigrade, to be honest it was way too hot for me. I arrived at night - maybe 8pm or so I got out of the airport and rode a bus for 2 hours into downtown Houston. From there I knew the park where I could find Kim at 8 am the next morning, I didn't realize just how far away it was so I just started walking. I visited a gas station to get directions and buy a bottle of cooled water after about an hour, and had made decent progress towards my goal. It was so hot and muggy though, 11pm at night and I was in a tee shirt, sweating. Around midnight and I haven't seen a gas station for a while so I walk until I find a fairly major street and pull over a taxi to take me past the park and then find a "cheap" hotel nearby. I think we had different definitions of cheap but I parted with my money and finally got to sleep just around the corner from the Tour40 event location. 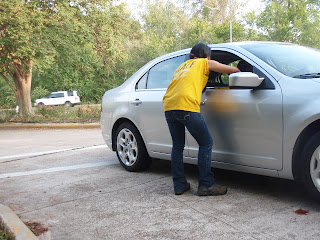 I spy with my little eye something beginning with a K

So despite that being my first sleep for around 30 hours getting up was rather easy. I had a quick complimentary breakfast (well actually I guess I was paying through the teeth for that orange juice). It was still really hot and the day was getting hotter and hotter. I left my bag at the hotel and went in search of the Houston Arboretum and Nature Reserve where I spied someone that looked rather familiar. 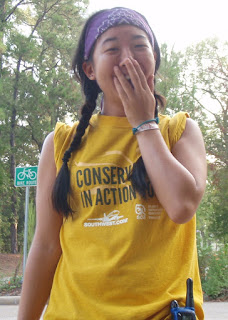 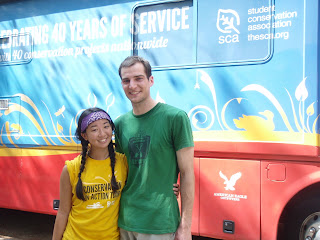 
I feel the surprise worked rather well. After the shock wore off somewhat, Kim showed me the bus she designed and had been living in for the last few months. Then we got into the conservation project they were here for, and what I had signed up for back in NZ. The summer in Houston had been particularly hot and dry so the project was to create a fire break around the buildings in this park. So we got a safety briefing about snakes(!), donned the thick leather gloves and put on helmets and safety glasses. 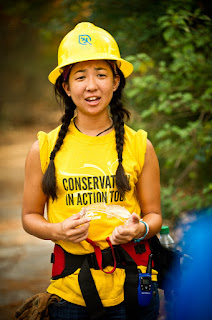 It was a really hot day so doing physical work was "interesting". We pulled all the logs and sticks out of a 100m section of forest around the buildings and then cleared all the forest litter and carted it away. There was a huge group of volunteers sweating it out in the forest including the CEO of Southwest airlines. We called it a day after about 3 hours, I must say it was very exciting that they had ice blocks for the volunteers!


So after surprising Kim and spending the morning catching up while working she had to leave with the Tour40 crew and I was going to meet them at their Hotel - "The Marriott near the airport". I picked up my stuff from the hotel I'd stayed in and caught a bus downtown. I went into a BBQ/grill place and got a turkey toasted sandwich - it was only $3 but I swear they used an entire turkey! It was massive! I couldn't help but notice the size of their cars were also rather extreme. I mean a Hilux would look small compared to most cars on the road in Houston. During the day it was painful to walk between buildings - even in the shade! I didn't spend very long in downtown because the heat was just so intense.

So I take the two hour bus ride back out to the airport (where I'd flown in to) only to find out there are 5 Marriott Hotels in Houston, and 2 major airports - unfortunately the one I wanted was at the other airport in the opposite direction way across the huge city. Way to waste six hours on a bus! That said it was a pretty good way to see the city and talk with some friendly locals.


Eventually (good 10 hours since I last saw them) I get to the right place and get some amazing Mexican food while the Tour40 crew has an award ceremony debrief thing. The Marriott was far to rich for my blood so I found a much better place not far down the road that was a third the price. Finally getting to talk to Kim was great, but sadly she was flying east to catch up with some friends that I didn't know the next day. I decided to head back to a climate more suited to me, and visit my friend Matt in Davis, California. This time Kim gave me a ride to the airport and we made plans to catch up in California in a week or so. I knew there was a fairly large risk that Kim would have immediate plans but I think it was worth it for the surprise - that said I won't be doing it again!
Posted by Brian Thorne at Wednesday, August 24, 2011