The second stop on my holiday to the states was visiting my friend Matt in Davis. Now Matt is really really into his music; he performs in the University of California Davis Marching band (Cal Aggies) as sousaphone section leader, plays the tuba in a funk band, and plays great piano. Spending time on his turf meant exposure to more music than I'm accustomed, which was great!

I went along to a band practise and then to a couple of their gigs. It was really impressive how 100+ young musicians can be so disciplined and yet have such fun at the same time. They rocked out to a few modern pop songs like Lady Gaga's Bad Romance. Some of the moves were choreographed brilliantly; a line of trumbone players alternated between swinging sharply side to side and ducking down just in time.

One of the events that I was priviliged enough to see was for a senior band members parent. I believe they raffle off a few performances a year and someone managed to snag one for a 60th birthday celebration. The band started marching to the loud drums a few streets away and easily filled the culdesac with young musicians.  After performing the obligitory happy birthday they rocked out to lots of classic songs. The Sousies and Saxaphone players are shown below performing on the move. 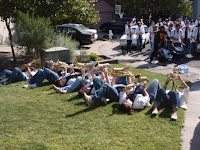 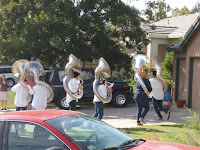 I also went into the University of California, Davis campus a few times, it was so different from any other I have seen. Canterbury University has a good proportion of cyclists, it was the predominate form of transport at UCD by a large margin. Some students were slack-lining outside of their rec center so I joined them for a few hours trying to cartwheel off the line and jump into trees.

One of the weekends took me south to San Fransisco for the Save the Music festival. Another brilliant Californian day which I got to enjoy with some really good live music!


Without doubt the highlight was watching the battle of the bands between the Berkley and Davis marching bands. Davis was a lot more lively and had a much bigger turnout for this particular show.

On my way back to Los Angeles the train ahead of ours sadly hit someone. After waiting on the train in the desert for a few hours we disembarked and were picked up by bus for the remainder of the journey.