Occasionally other people call me crazy, I take it as a compliment; yesterday however, I called myself a bit crazy. I'll set the scene that lead up to me ringing 111.

So no shit there I was paddling down Maori Gully with Monique, Cristal, Dale, and Rob. We had already had one swimmer in the second rapid so we were taking things quietly and paddling as a group with myself in the front and Rob at the back. Queue a few missed rolls and Rob and I were just picking up the pieces from a double garage sale - both swimmers were bought safely to the bank after swimming down some chunky rapids. I'd thrown one paddle up onto the rocks while Rob was tackling a boat, a cursory look around told us the other boat must have continued downstream - they don't often stop of their own accord! I paddled down past him to chase the boat. I blasted straight through everything down to the getout and knew I would have caught the boat if it had been ahead of us. Queue running up to the road and running with boat back to the group. I jumped back onto the water and fairy glided across to see Mon and Christal on the bank walking down to where Rob had finally subdued the boat he was rescuing. I got out and walked up to Rob and Dale, paddling down with them.

When we got to the others Mon said her paddle had passed them by 5 minutes ago. Leaving everyone else I said I'd try get it back, I paddled straight down the gully for the second time. Our shuttle bunnies Marie and Juliett were down at the get out and proclaimed a paddle had passed about 3 minutes ago in the middle of the current. I decided to continue chasing it. Shouting at the bank “you might have to pick me up at the road” I took off again.

So unbeknown to me a while after the gully is another two gorge called "the chutes" that the whitewater club paddle - some more grade 2/3 stuff like in the gully. Was certainly a touch dodgy because I was soloing but to be honest I was having a great time! The was only two more mini gorges, neither as long as the gully but both with some decent paddling. After these gorges I'd been paddling for maybe half an hour and there were some rather large hills between me and the Lake Summers road, not being particularly fond of carrying boats great distances I decided to paddle down to the bridge.

The whole way down I was searching in the eddies and keeping my eyes peeled for the damn paddle, unfortunately once I reached the plains the river branched so often there was a small chance I'd see it. Once I spied a black blade wedged into a rock on the shore, with a massive grin on my face I jumped out of my boat and retrieved it... sadly it was just the blade and I think it had been there for quite sometime as the carbon fibre shaft fell away like dust!

About half an hour before the bridge I stopped and talked to some pig farmers to ask how far it was and asked if they could stop any cars carrying boats and tell them what I was doing and where I would be. 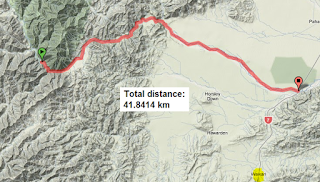 It took me under 3 hours to get the whole 42km to the road - I was a little surprised when no one was at the bridge, it seemed like the most logical place I'd have to pass. Knowing that they would be worried about me by now I stashed my boat in the bushes at the bridge, hitched to the Waikari pub and asked everybody around if they had seen any boat laden cars. I got a fair few weird looks being soaked and in all my paddling gear! I wish I had a few phone numbers on my person so I could have tried communicating directly with the others. I borrowed the pub's phone and rung 111 to tell them not to send out a search if anyone rings them up, ringing to to lower the alarm if you will! I then just watched the intersection outside the pub that the others would have to drive through. Calling the police proved useful because about an hour later someone rang them to raise the alarm that I was out lost on the river somewhere near Maori Gully while in reality I was still chilling in front of the heater at the pub. I found out afterwards that Rob and Mon somehow visited a SAR volunteer's house! Another guy from SAR came into the pub just to talk about the situation while I waited for the others, he was stoked I'd rung 111 because he'd already been on the phone to a chopper pilot - thankfully he never had to leave his house when they found out I was safe!
So did I even find the paddle? Nope, but I swear I tried my best! I did a bit of reconnaissance, and had a fun solo adventure though. A trip from the top of the gully to a farmers just on the plains would be a sweet new run for the UCCC. Maybe a longer trip all the way to the bridge would be good - with the shuttle drivers knowing where to go next time!
Posted by Brian Thorne at Sunday, October 31, 2010