Since finishing the last of my classes in June I have been enjoying some free time. First up was a visit out to Kaikoura to help my friend Kieran with some field work. Kieran is doing a masters in biology - looking at caching behaviors of South Island Robins. So I spent a few days throwing meal worms at birds.

To start with the birds do as expected, they eat the worms. Curiously after about six worms have been eaten the robin starts hiding the worms in nearby trees for later consumption. I was astounded by how beautiful it was at the University of Canterbury field station. 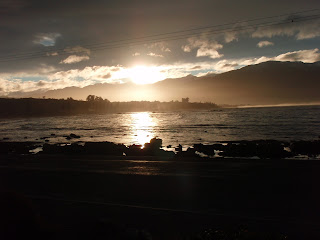 Waking up in the morning across the road from the sea, watching the sunrise over the waves was outstanding. Following Kieran's example, I started going for a run each evening. Can't think why it was so enticing - must be the sea air.
On getting back from Kaikoura I went on a skiing binge. Met up with friends down at Treble Cone in Wanaka and proceeded to hit the slopes. Having just bought my first ever pair of skis on trademe this involved a very interesting first run as one poorly adjusted ski kept wobbling sideways! A visit to the gear shop saw me right and I was away blasting down black runs with Ellen, Ivor, Kirstie and Ollie. The field is very big, but conditions weren't ideal for our visit.

We stayed at a motel in Wanaka that had a hotpool. Kirstie, Ollie and I decided to go check it out, unfortunately we got into the spa before working out how to turn it on. A game of rock-paper-scissors followed by a fierce game of "guess the closest to the average of all our guesses" (yes we made that up in the hottub) decided who would try convince the office to give us bubbles. Annoyingly the office informed us that, one it was broken and wouldn't produce bubbles and two they charged for the use of the spa, grumble grumble.

Cadrona was next, this was my favorite day of skiing since Banff, Canada. I did steeper stuff than I usually do, lots of runs off tracks and generally had a great day. Our convoy was first up the field and we squeezed in as many possible runs as we could. Kirstie, Ollie, Ivor and I had a few races - I think the best being a very tight finish between Kirstie, Ollie and I. With the end (chair lift) in sight we got to a junction. I went left along a slightly longer route (which I think cost me the win), Ollie went right to take the win and Kirstie kept going straight. Unfortunately straight wasn't really on option and Kirstie went flying from a very high speed crash, ouch! 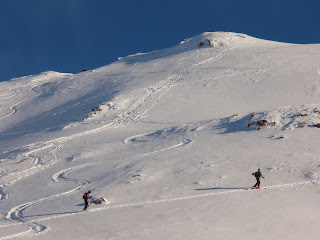 For the third consecutive day of skiing we went to Ohau. This was my first visit here and despite being unimpressed with one lift had a good morning skiing. From the top of the chair lift there was a boot pack up to the top of the ridge - well worth it you can see my fresh tracks on the right of the picture above. Tom offered me his snowboard so I gave that a crack for the afternoon. It felt like I was being beaten up... a constant battle with gravity. 4 or 5 times down the stupid magic carpet thing and I think I had the hang of the basics (thanks Tom & Lindsey for holding my hands a couple of times down!). I followed the others up the chair lift this time on snowboard - warned the liftie that I was about to make a fool of myself but proceeded to glide off fine. A painful trip down the slope ensued, but I got to the bottom then did it again. I think I'll give snowboarding another try because turning wasn't quite feeling natural. Plus who could pass up getting a beating...

Next day was the start of a fairly long tramp right through Nelson Lakes National park in midwinter. That can be the next post.
Posted by Brian Thorne at Monday, July 12, 2010 1 comment: