Just a weekend away in Arthurs Pass, the crew was: 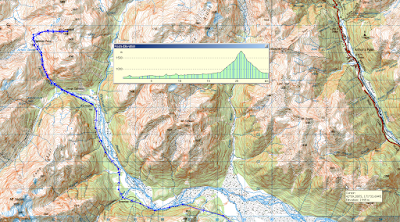 The initial plan was simple: Set off early on Saturday morning, head up the Waimak to Carrington hut then dump the overnight gear, climb Mount Campbell then back down to Carrington for the night, then out early on Sunday. 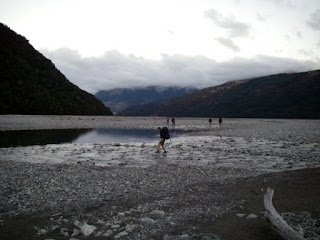 starting off up the Waimak on Friday evening

The first change of plan was leaving Christchurch on Friday after work/uni. So the trip to Carrington is supposedly a 4 - 6 hour walk, after the 2 hour drive to Arthurs Pass. Despite leaving at about dusk we made it to Carrington late that evening. The weather was great for the night time walk in, stars were out in all there beauty and the river was COLD. I decided to try keep my feet dry, jumping from rock to rock etc that lasted right up till just before the hut unfortunately. My torch seemed to run out of batteries and I'd removed my spares - great! So I walked next to Tom most of the way - his torch was bright enough for everyone anyway! At one stage we diverged from Volker and the rest of the group - we managed to keep our feet much drier and get from A to B faster. I only mention that because it happens so rarely! 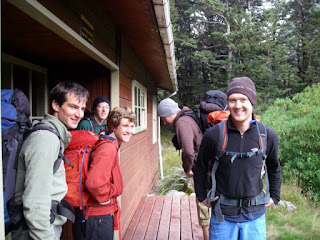 The hut was fairly full, but by the time we got up everybody had left. Not to worry we decided to spend enough time for two cups of tea on changing our plans for the day. The weather had taken a turn for the worse so Mount Campbell didn't seem like a pleasant prospect, so to leave our options open we took all our gear with us and climbed up to Harman Pass. 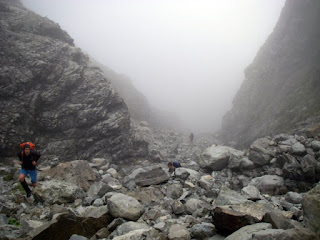 Heading up to Harman Pass 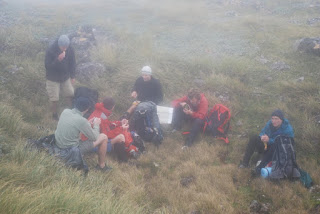 Enjoying the weather on the pass


We obviously passed everybody else on our way up there, and stopped for a cold snack on the pass. The weather was still pretty crap so no one was particularly keen to go up the mountain further. So all being rather fond of hot pools we went down to Julia hut for a soak. 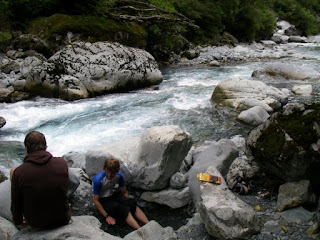 On the way down into the Taipo valley, Volker and I found a large horde of snow berries and proceeded to gorge ourselves.

Sadly the hot pools at Julia hut were both too hot and too small. We did have some fun trying to brew a cup of coffee by floating billies and cups in the small pool, and it was entertaining watch Volker scald himself two or three times in the hot water. 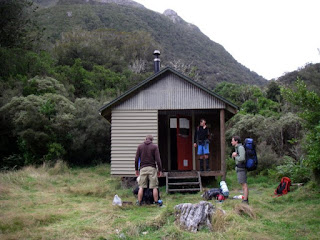 Eating lunch was done complaining about the lack of usable hot pools these days then we kept walking... and walking and walking. The quote of the day would have to be "the rivers to deep and cold to practice safe river crossing technique", we ended up crossing the Taipo so many times - you will be disappointed to read that on ONE occasion I had to get my feet wet, although I did take my boots off and use my runners because thus far my boots and socks were dry.

Our plan was Mid Taipo but when we arrived there were already two people in the hut so we opted to keep going to Seven Mile Hut. This was really a village, there were a few old huts and hunters cabins etc. Volker and I were particularly excited to find black berries, we ended up at least half an hour behind everyone else due to the second foraging mission of the day. Somehow Volker restrained himself enough to collect some black berries for desert - I on the other hand ate as many as I could as soon as I found them! 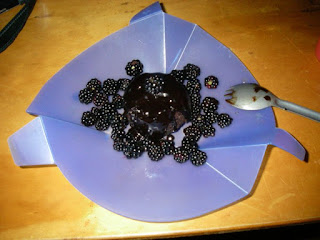 So Saturday came to a close, the crew was actually rather tired, we had traveled about 30 Km. Dave took the opportunity to bust out his cheese fondue set - complete with swiss cheese, a ceramic bowl, toast and a bottle of beer to make the fondue with! It certainly hit the spot and gave us all grand illusions of being in a very civilized setting. 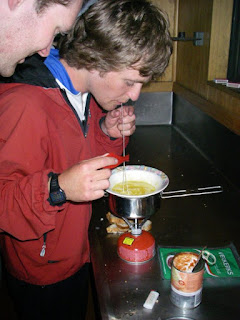 Come Sunday morning and we had a pretty small walk out if we continued following the Taipo, clearly we didn't want that, we wanted more adventure! So we got the Kelly range in our sights and ambled up to the tops in the now glorious weather.  I took a very refreshing swim in a tarn (shown on the map), I'm pretty sure everyone else was jealous of my swim, but no one joined.

At Carrol hut for lunch, then Tom and I raced down to the road and hitchhiked back to our cars at Klondike Corner. I wasn't back in Christchurch quite in time for kayaking that evening, still a pretty full weekend out!
Posted by Brian Thorne at Wednesday, April 07, 2010