So 2009 was my first Christmas away from home, the first away from my country and from my family. In the past we have gone out to Mavora Lakes for a quite camping Christmas with the family, we would load bikes, boats and tramping equipment and go set up a city of tents. Invariably it would rain and we would mostly rain and complain about wanting to go home. Still I can't deny I enjoyed those Christmas holidays immensely.

I spent this year with Kim's family in Los Angeles, I even got a stocking (well one of Kimi's old socks) with some presents! The main thing I remember about this Christmas was the food though, I just ate and ate and ate! I have found I rather like snapple, and I like it even more when mixed with sparkling apple juice.

So as I hinted at earlier I went out by myself in Los Angeles and managed to get lost. The two things that threw me were so silly - I had been going off my memory of when Kim had driven around pointing things out and I remembered that something was across the road to the right when we were travelling north.... I have since worked out that the sun is not always in the north half of the sky like in New Zealand - quite the opposite infact. Also across the road when walking I was thinking of driving on the left so turned the wrong way... Oh now that I'm thinking about it there was a third getting lost too - I went down 36th place instead of 36th street for a long time before realizing my mistake! 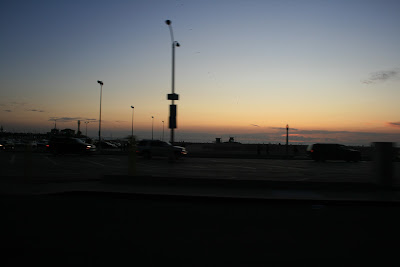 Back under the safety of Kimi's guidance we made it to the beach. I say beach but it really isn't the same thing that I called a beach... I mean it was hundreds of meters wide, kilometres long and all nicely cleaned golden sand - a far cry from the small oft rocky beaches we have in New Zealand! We went for a paddle but decided it would be indecent exposure to strip down to undies and go for a dip. Although its the middle of winter I swear the sea is warmer. Strange fact, the one way exits around Los Angeles - like at the university or the beach have one way spikes so if you were to reverse over them your tires would actually be shredded.... overkill much? 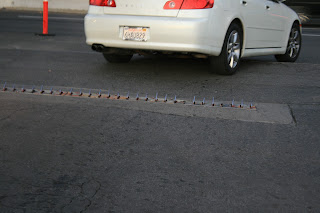 The other place Kim took me that improved the city immensely in my mind was the Griffith Park and the Griffith Park Observatory. We saw a wild coyote which I thought was pretty cool! It was really special when we went up to the top by the Hollywood sign at night to look out over the big (BIG) city lights.

We also went to some cool shops and places to eat - there was an amazing tea shop called Royal/T. The soymilk rose petal and vanilla black tea was truly an experience! It coupled with an art gallery - portable disco anyone? You could actually control the music in this thing! Also while in Los Angeles we drove through Beverly Hills and Hollywood. It was all glitz and tourists taking photos of the glitz, well okay there were some (very) nice cars, some shops wrapped up as presents and a whole lot of Christmas decorations around.

Hmm, so I don't think Hollywood is quite right for me! Onwards to Canada!
Posted by Brian Thorne at Wednesday, January 06, 2010