First impressions of Canada; It is cold. No, it is really cold. This wasn't unexpected as for the last 2 months every email I have had with my friend Ian has involved questions like would you be comfortable sleeping outside in minus 20, and absurd statements such as we will probably stay in if it approaches minus 30 because it no longer becomes fun to be outside! I was aware that the nice temperate climate of California I had been getting so used to was going to be all over even before I arrived in Canada. 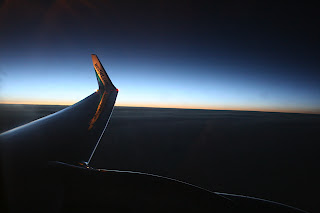 I had a slightly bad experience at the airport; my tramping bag has had a sling and locking carabiner attached to it which was missing when I collected my bag... A locking carabiner is what we trust to anchor ourselves to the rock (or ice) when climbing, so there was about 0% chance of it coming off by itself. So I blame either the baggage handlers at Calgory or Los Angeles airport for swiping that.

Anyhow after walking outside, (then back inside to put on more jackets) Ian picked me up. Shawn had already arrived in Canada and the three of us went to a privately owned burger joint - Peters Drive-in. Against all logic we stood outside and ordered ice cream milkshakes.... in the balmy minus 18 degrees C and some wind! Brrr bad idea! Reb's flight was delayed until later so we went to a mexican pub and drunk some cold margaritas. 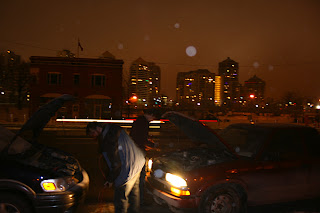 Sadly Ian's car didn't start after this so we were a bit late picking Reb up from the airport - Opps! Still it could have been worse; Kimi's flight was canceled so she got the pleasure of spending a night in the Denver International Terminal - united airlines didn't think it should put the passengers up for the night because the flight was canceled due to weather... even though our flights arrived after hers was scheduled to arrive. So instead of heading straight to Banff we stayed with Ian's brother Niel in Calgary. We then had the coldest night on the town ever! It was a matter of bundling up in multiple coats and walking very briskly between bars, once inside there were still scantily clad girls ripping up the dance floor at the clubs and tee shirt wearing guys drinking pitchers of beer at the pubs. We were planning on taking a train home, but after 20 minutes waiting at the station at 2am three people had offered to pay for a taxi just to get out of the cold! In the morning Niel made us waffles, which I am pretty sure is the first time I have had (I approve!). 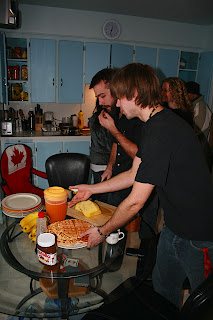 So we finally picked up our missing small Asian from the airport. While still in Calgary we purchased a whole lot of food because prices in Banff have the reputation of Queenstown. The drive was rather uneventful, Ian kept telling us about the mountains that were around but sadly all we could see was white snow underneath, and white cloud/fog above, the most interesting section was through the forest where at least we could see some trees! 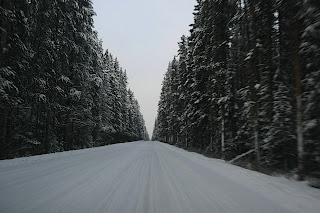 Michelle had left instructions of how to find her and ChrisB's apartment, they were of the "at the big tree turn right" variety and it took us a while to find it! So 5 extra of us squeezed in with Michelle and ChrisB with all our gear and proceeded to destroy their peace and quiet and take up their limited space for the next 4 days. 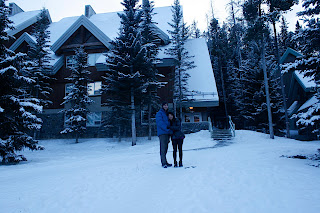 Kim and I outside our new temporary abode. 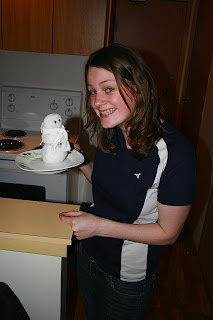 It was a good thing we bought so much food with us, it appeared Michelle had been serving snow men based on what we found in the freezer!
After getting all settled in and rested up we spent a day sightseeing around Banff. Chris unfortunately had to work almost every day that we were there, this meant getting up at 6am, stepping over the 5 or 6 bodies in the way and getting to the mountain where he is a ski instructor. We tried to find a moose for Kimi and a Wolf for me, but so unexpectedly it just didn't seem to happen! Here is Ian, Reb, Shawn and Kim playing tourist on the Johnson canyon walk. 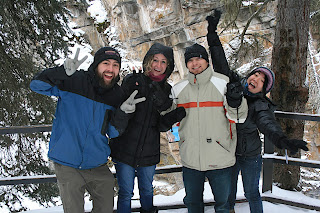 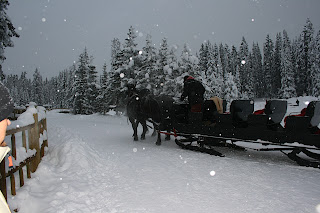 The closest we found on our quest for big animals was this horse drawn sled at Lake Louise. Kimi was quite disappointed she didn't find her moose, although there was a convincing wooden board imitation. Snow ball throwing is kind of difficult here because the snow is all just a fine powder it refuses to clump properly - none the less Reb managed to make a massive chunk! 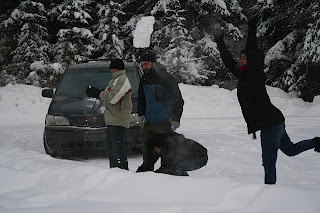 On the way back from our sightseeing day we saw Elk on the side of the road, I wasn't fast enough with the camera though - and it was getting dark. That evening just happened to be new years, we certainly had a good party with 7 people in a room fit for 2! I must say the game "F*** the Dealer" really didn't do it for me - or perhaps it did! Just before midnight we bundled up and walked into town to watch an impressive fireworks display from the bridge. 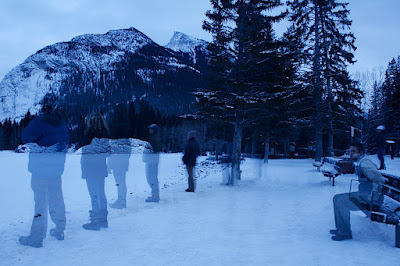 New years day was planned entirely as a day of recovery for all but poor ChrisB who had work. We learn that the only thing in the world that will phase Chris is if there isn't a single clean bowl for him at 6am for his bowl of special K before work! Once the rest of us roused we went for a walk down to Bow falls just outside of Banff. I decided to get creative with the camera, the above non-photo-shopped picture is the team as ghosts with Mount Rundle in the background. 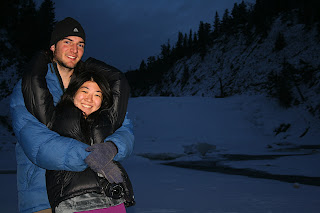 There are a few more photos in the picasa web album here. Stay tuned for Canada part two!
Posted by Brian Thorne at Thursday, January 07, 2010