Late on new years day Ian's friend Dan showed up from Calgary with lots of metal toys for us. Apparently these toys were confiscated and had to be stored below deck as the bag passed through a metal detector - and the 6 ice tools and 2 pairs of crampons were not deemed "safe" carry on luggage! ChrisB sure had fun opening doors with the ice tools, and everyone had a look and thought how bad-ass we must be. 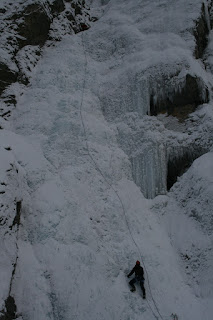 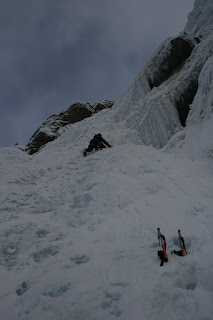 The next day Ian and I went Ice Climbing with Dan, this entailed a predawn start with Chris and a nice drive towards Jasper National park seeing a few mule deer enroute. We arrived at the Weeping Wall nice and early, there were two other cars with ice climbers who were also gearing up. They checked to make sure we would be well out of their way before everyone else slowly left us as they made tracks for the waterfall. The three of us watched one of the pro teams boost up a pitch and then we started setting up our own gear on the easiest climb - "Sniveling Gully", the route we had chosen for the day. Dan being the most experienced lead up the face and put in ice screws as protection as he went up. After setting up an anchor he belayed me up the face and into a very steep gully. Ian then came up, and continued on up the gully to see what was happening. Very annoyingly Dan and I could hear next to nothing from Ian in this position. After a lot of debate on what to do, I belayed Dan up, while Ian belayed from above. Dan then belayed Ian down to me before down-climbing to our trusty anchor position. This was followed by setting up a two rope belay off the anchor and getting us and all our gear safely off the cliff. It was very cool to see the experienced teams beside us do 3+ pitches of far harder ice climbing in the same time. 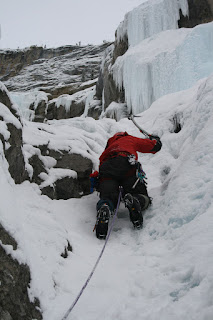 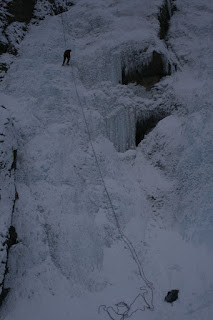 Ian had a paper to write so once we got home, everyone else started drinking and having a good time while he attempted to be productive. Morning came and he was still at it! Dan had missed the last bus back to Calgary and unfortunately had work the next day so Ian kindly drove him home and slept like a log before returning the next day. Meanwhile Kim and I left the apartment at the early hour of 3pm for a walk around Banff, we spent a while watching people skate on a frozen lake and enjoying the snowy forest before walking into town to meet up with Chris and Shawn for some shopping. 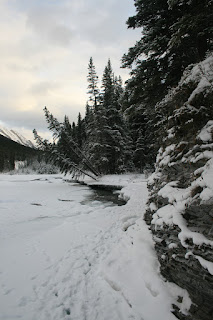 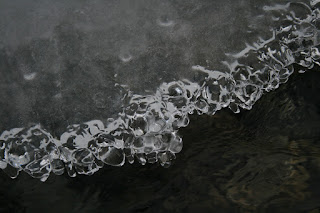 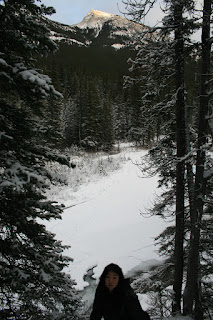 The next day was just absolutely fantastic... went skiing on a powder day at Lake Louise with ChrisB, Shawn, Ian and I. Ian arrived back at 7:30am from Calgary, meeting up with ChrisB at the "Meeting Place" before having an epic day of skiing. I was expecting the skiing to be completely different from New Zealand, I must admit weaving in and out of trees and the gorgeous light and fluffy icing sugar snow was... well words fail me. Got in quite a few more black runs than I usually do and had some really fast and fun green and blue runs too. I think Chris summed it up nicely when suggesting we rename it to "awesome-day". I can't get across how good the skiing was. 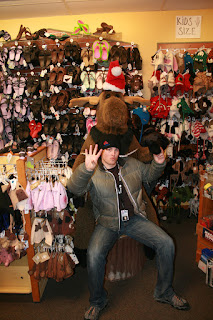 That evening we went out in Banff, I think we found the locals hangout as it was mostly old people. We got some strong glares as we danced to the country music at the pub. Strangely they lightened up when be began putting our own music on the jukebox. The place also had free popcorn, bit strange for a pub and I don't think it could be used much as the popcorn we got was very stale and salty!


The weather wasn't always perfect for driving, on the road to Ian's parents we passed 10 vehicles in the ditch within 10 minutes! It was so good to have a big meal cooked for us and proper beds to sleep in. Snow angels were called for once at his folks place in the morning before heading to the airport. 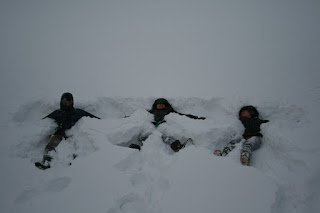 We had to drop off Shawn, Reb and Kim at the airport, on the way we went to a huge outdoor shop that had a waterfall and hundreds of stuffed animals. Once again flights didn't go quite as planned, Kim and Reb were delayed - they got put up in the Hilton though! Now I've still got a few days in Canada to see my moose!
Posted by Brian Thorne at Tuesday, January 12, 2010