Leaving on a Jetplane

Well I planned to write some stuff down about what I get up to this summer, so here is part one... getting to America!
Monday the 14th of December 2009 is when my holiday started. It is also the longest day I have ever had. First task was cleaning up and clearing out my room, this long drawn out process was spread over the preceding two days as well. 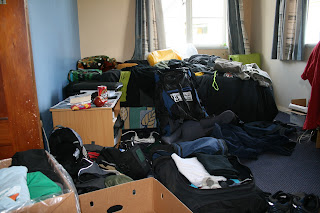 My room had certainly looked better, but I managed to find enough banana boxes to pack away all my belongings that weren't to come with me to the states. 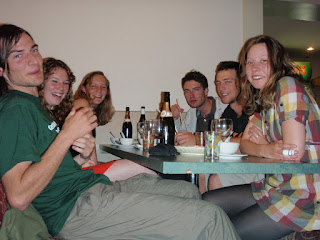 A farewell dinner with the flat was a brilliant prelude to a long play of rock-band with the girls + Oliver. We were playing at HitLab - the amazing place that I call home at university, it was all fun and games until an agitated security guard decided we were clearly not supposed to be smiling on campus - he took our names and very kindly passed mine onto the university proctor for letting unauthorized people into a secure building. 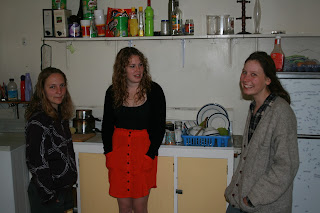 Well after telling our lab manager about that hopefully minor issue I went on to meet with people about next year. Two of those meetings were in the computer science department. Firstly, I had submitted a paper for a conference next year and the department has agreed to send me, plane tickets are already booked; seems strange as it hasn't been accepted (or rejected) yet. Secondly, hopefully I'll be tutoring python to first years at the old University of Canterbury next year.
A quick meeting with my supervisor for my summer work who strongly recommended visiting The Mountain Sun while I was in Boulder, Colorado. Lots more vacuuming and cleaning of windows and I was out. Thanks must go to my wonderful flatmate Jo, for dropping me out to the airport with all my tramping and nerd equipment. Ice-axe and crampons were stowed out of site inside my pack and laptop case full to the brim!
My mother very generously lent me her digital SLR camera for my trip, so I have no excuses for crap or nonexistent photos! That said my wee laptop struggles with the high res images a bit, I can't use the normally swish OSX cover flow for previewing images... 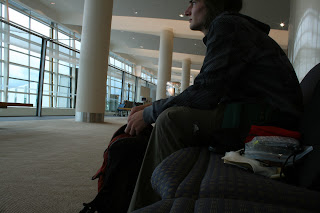 Waiting at Christchurch airport for the small flight to Auckland before the big flight to the states. I was really lucky with the timing because I saw the most amazing sunset over the alps in the south island on route to Auckland. Everyone else was too busy sleeping to notice, but the view was magnificent; I didn't have the camera with me though, and didn't want to climb over people to get it; I won't make that mistake again. For some reason we were not allowed to take anything from duty free in Christchurch through the international terminal in Auckland - and no we were not warned this would happen. Luckily I hadn't purchased anything but I felt sorry for those that had! I was made to finish my water bottle twice though - I thought that after passing through security in Christchurch I could refill it, but then I had to drain it or drink it in Auckland as well. Shame because I then forgot to refill it for the proper long flight and I had to go to the toilet while all the flight briefing bollocks was happening. When I got onto the massive 747 and found my seat I was very worried - I had no TV and everyone else seemed to! Disaster?! No, luckily I was put at ease as the Air New Zealand stewardess pointed out that mine was under my seat on a stand... All good! Fast forward 12 sleepless hours.... One meal of fish later.. 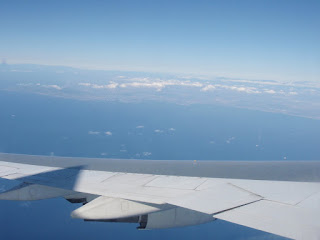 Honestly I know I watched 3 movies, but don't know what the were. I also saw at least 5 episodes but don't know what ones... Read a bit of two books and listened to music. Something quite cool happened after a few hours, when most others were asleep; it got light outside - the blinds had all been put down but I was awake to see us flying back to the Monday that had tried to leave us behind! Anyhow coming up to Los Angeles was a treat - obviously I was stunned by the size of it. Then the plane turned and I saw at least 5 times more in the other direction - we flew over the city until we couldn't see the sea on the horizon anymore... I really can't quite believe how massive this sprawled city is. 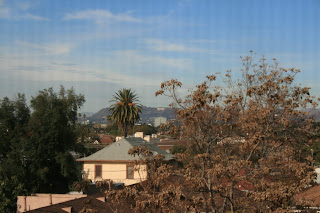 Once I collected my bags the damn phone machine stole $3 while I tried to make a single local call - not off to a great start but eventually I got through to Kim who came and picked me up from LAX!
Dropping off my bags, picking up her flatmates we made way to the Cheesecake Factory for a delicious welcome to America meal! Bring on sunset number two as we got back to her flat and from the window I spy the Hollywood sign up on the hill.
Posted by Brian Thorne at Thursday, December 24, 2009