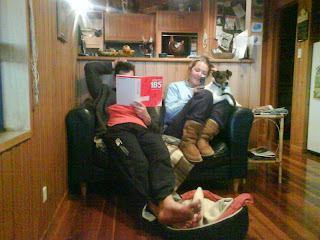 Aww So I went up to stay at Hamish's house over the holidays - plan was to climb Ruapahue and Ngauruhoe.

In the end we settled for just one of them. Starting at a carpark on Ruaphue we walked through the snow and past this waterfall.

We then got off the track and headed for the plateau between the two big mountains.
The snow was very deep and we had a few large detours to miss big drifts after they swallowed the leader! Eventually we got to a decent looking place to camp on the south side of Ngaurauhoe.

Pretty late to start setting up the tent. The plan for the next day was to climb to the top then camp in the valley at the very top. This is the view from just out of our campsite...

A very fun hour or two later this is the view from the top! It was a really good climb up the south side - nice and solid ice really good for the cramponing made the trip up quick and easy.

View from the top wasn't half bad! We then went into the small valley at the top and started digging a shelter for the tent.

So the shelter just was taking too much effort and the wind was getting up and up... so just after sunset we decided to go down the mountain. So we packed up in the dark and got out the packliners ready for an epic bum slide! 2 minutes later we were on the Tongarero Crossing track on the north side of the mountain. We then tried to follow the track west towards a hut. In the dark and snow the track was rather hard to follow however and we got a little off course. Going down the Devils Staircase off track and procceding to get bluffed out... on the way back up there was a small ice ledge beneath a rock that just looked ideal for a bivvy. So busting out the packliners again, hammering the ice axe on the side as a safety barrier we slept under the stars.

The view in the morning was pretty incredible as well. Watching a few people come up the valley from our perch.

Eventually we got up, found our way down the cliff and back to the track. A quarter of an hour later we were at the hut, then walked back to the carpark.

The view looking back towards the mountain... Mission complete!