Day one (Christchurch to Wanaka via Mount Cook) - So the four of us (Hayley, Dave, Hamish and myself) met at the ucsa carpark at 9am, decided then and there to take 3 kayaks from the gear shed so with mine allready there it was pretty loaded! After shuffling some cars around and going back to three of our houses for things left behind we finally hit the road.
First we headed to Mount Cook - Sebastipol Bluffs. I had my first ever multi pitch climb, ok so it was only grade 13-14 but there were 3 pitches and I was leading and it was fun ok! 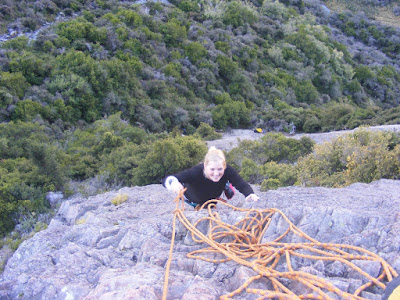 In fact the guide book said that the second pitch was the best grade 13 climb in the south island! Was amazing from the top tho - never climbed so high before! 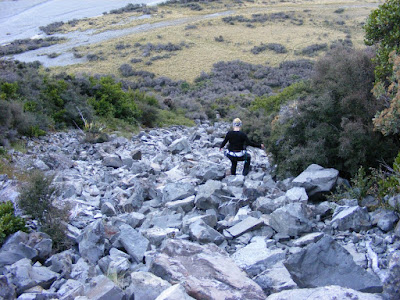 Then a casual scree run in climbing shoes down to the car as dusk fell upon us. We drove through to Wanaka that night and set up our tents on the lake front very very close to town. Got the kayaks off the roof and had a midnight paddle on the lake, including some limbo under a twin hulled boat and a race. Near our camping spot another group had lit a fire on the beach so being cold and wet I figured we should rock on up and make some new friends! Worked a treat - I even was offered bourbon for a go in my boat! Clearly onto a winner, we joined in the festivities at the fire and got out our guitar and drum! One of the people at the fire was absolutely amazing on the Guitar so we were well entertained. After drinking a goon sack of country red (not too bad actually!) we headed to our tents for the night around 3am.

Day two (Wanaka to Te Anau) - 5:30am council security woke us all up proclaiming that we had 5 minutes to pack up our shit and move or face a $500 fine! This was every so slightly annoying especially since all the kayaks were spread out - wet gear everywhere, dinner stuff cookers/dishes all over the place...
Good early start to the day, joy! So we packed up in the dark grumbling a little at our new friend authority and headed out to Hospital Flat (the best climbing crag around wanaka). Set up tents and slept in the car park. Eventually rising to climb in the dusty wind. I optimistically tried and failed to lead a 17, but blaming the wind rather than my climbing gave up to let Dave lead it and then I seconded it on top rope. Good times had by all then we headed back into wanaka where I met up with an old school buddy Glen Victor Collins - it was great to catch up with him. After some subway we headed to puzzling world but couldn't bring ourselves to part with money for the tour or puzzling room... So we sat in the cafe playing with puzzles for a few hours... Eventually we got kicked out as it closed and we had to drive... So a few hours later we get to queenstown - Dave reakons the remarkable carpark is not to bad for camping so we drive there to find that it is just a big gravel car park with no view/grass/trees/anything at all going for it. And its raining! So I mention my house in Te Anau being empty... and after some indian naan and fuel in Queenstown we head to homer street in the heavily laden Big Brown. So beds was better than camping, Dave who had slept outside in his bivvy bag the previous night didn't know what to do with all the comfort! 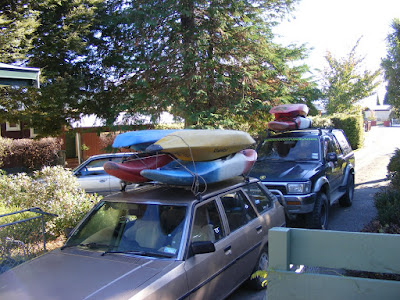 Day 3 (Lake Te Anau - Lower Waiau) So today we had a proper flat water session in the warm lake Te Anau for Hamish and Dave who hadn't done any kayaking before. Incredibly after a few demos, a swim or 4 from dave, they both got wet-exits, buddy rescues and C to C rolling down! Hamish busted a roll after 3 attemts!!! 3! Insane! on the drive home from the lake I spotted a familliar truk with kayaks on the roof at the holiday park - turns out two mates from the kayaking club were in Te Anau as well, so had a catch up with them and decided they should also come stay the night. Unfortunatly due to a guard rail jumping in front of Emily's car Roy and Emily had to drive into Milford to play mechanic and put in a new radiator. After some sort of epic pancake lunch we played 500 inside until it cooled down a bit - then we drove to the river and went for a paddle! It got dark and cold by the end of the river. Brrr, didn't even jump off the bridge. Still it was a good time! Had stolen my brothers car for the shuttle but found out he had no rope for his roofies.... so annoyingly had to double shuttle back and forth to get my car. More drinking and finishing the game of 500 - with the all important graph! I think two lost mesairs in a row did H&H in, DB claims the victory! Eventually Emily and Roy arrived back from Milford, looked like they would have to go through again to change something.
Day 4 (Te Anau - Homer Hut) Got off to a very early start, an epic pancake eating session with a triple batch all dispatched in no time - I think we left Te Anau for Milford about midday. We realised that we had kayaked in Didymo infected waterways so at the divide we cleaned all our kayaks and gear in freezing water. But then we went kayaking properly! The Hollyford - Falls creek to Marion swing bridge and it was low - very low! All six of us got in at the top - but after a short spell it was decided for Dave and Hamish that they were not quite ready for this technical rock garden river. Can't say I was popular with the two of them - as they were having fun! While we kept paddling they went up to Homer Saddle for a nice view. The kayak went really well - had to portage some of the drops as the river was lower than I have ever seen it. At the main drop a scout showed it could be done but looked a lot more dodgy than usual. Roy and I went down the rapid leading up to it but then pulled the pin and portaged. It was dark by this time due to out timely start and we opted to get out at halfway - the hollyford turn off. Then a run to the car to warm up. After getting changed into warm dry gear we went up to pick up the kayaks then headed to Homer Hut. We got there and Hamish and Dave were not there, we asked one person if they had been around and they said no. So it was assumed that they could not find the entrance which is rather hard to see especially at night. So Hayley, Roy, Emily and I went for a drive around to look for them (and Roy's truck!) Eventually at the tunnel car park spotted the car and a single light a long way up the hill. After a short wait Hamish and Dave got back from a quick jog up to Homer Saddle and we all went to Homer hut to hang out with Derick Thatcher and a few other famous nz climbers.
Day 5 (Homer Hut - Milford - Te Anau) Yay the tourist drive into milford! Had a good look around at the chasm before all the tourists arrived, and went down to the pool at the bottom to hang out for a while. Went for a walk along the lake in Milford and then caught up with Roy and Emily trying to fix Emily's car. Decided that another paddle was definitely called for so we went and did the Guns camp run, a very easy grade I - II paddle.

Day 6 (Te Anau - Wye Creek Queenstown)
Wye creek! Good afternoon of climbing, after a huge walk up the hill to the crag! Dave tried a ridiculus overhang, but wasn't feeling up to it. I lead a few easier climbs (14-15's) with Hayley seconding them all fine. Met some locals who were very helpful and pointed out a sweet place to camp for the night. 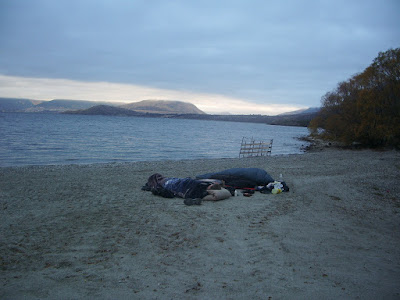 Dylan Taylor ended up meeting up with us, and Hayley, Dylan and I slept on the beach under the stars.


Day 7 (Queenstown - Queenstown) Went for a climb in the morning - lead "The Mission" a long sustained 16. Was really pleased to finally get to the top. 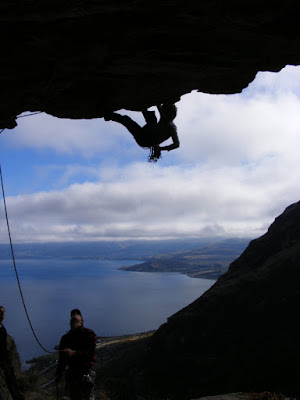 Dave got his overhang. We then headed down and moved from our awesome campsite into a car park at the bottom of fern hill Queenstown. Had an epic night out at Mels engagement party before hitting up another few bars. Would have liked to go to the world bar but Roy was too intoxicated apparently. So Hayley Roy Emily and I went to subculture, which was pretty sweet.
Day 8 (Queenstown - Chirstchurch)
Last day, I went and saw mel in the morning. Lunch with my Mum and brothers at Jim's house in alex. Dave takes us on a rather large shortcut over a gravel road - miles of it!
Kinda results in Emily beating us back to chch after we had a 2 - 3 hour head start!
But we all get back to christchurch in one piece just a little worn out. Wicked trip!

So for easter Hamish, Volker, Dave, Morgan and James all went to Paynes Ford.
Meet up with Luc and Megan from the UCCC when we got there.
Was an amazing trip - got some lead climbing in on real rock, with some beautiful scenery.
Ran the top section of the Abel Tasman with Morgan - which was pretty damn sweet. Swimming at Totranui will never get old!

Photos are available on facebook
Posted by Brian Thorne at Tuesday, April 01, 2008 No comments: